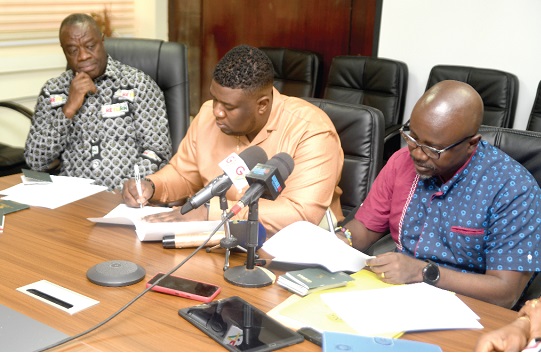 The Ministry of Tourism, Arts and Culture has signed a Memorandum of Understanding (MoU) with Afrochella, a not-for-profit organisation, to bring Africans in the diaspora back to the country to promote tourism.


Under the agreement, Afrochella has been tasked to bring in 20,000 tourists by the close of this year.
At the signing ceremony in Accra onMay 12, 2022, the Sector Minister, Dr Ibrahim Mohammed Awal, urged the organisation to live up to expectations.
“Last year, you gave us about 10,000 people who came in for the Afrochella festival, and this year we need not less than 20,000. You have demonstrated it and I know you can do it and we are going to give you all the support you need,” he said.
Afrochella organises its musical concert festival which features African artists in December every year.
The biggest celebration of the festival was in 2019 when it was featured as one of the premier events during the Year of Return. The celebration, which began in 2017, brought together many patrons in the country and from the diaspora.
Destination Ghana
Dr Awal said as part of efforts to promote tourism in the country, President Nana Addo Dankwa Akufo-Addo last month launched “Destination Ghana” and other initiatives in the UK to help boost the industry.
“We want by the end of 2024 to have about two million visitors in the country. From 2024, two million every year and then increase by at least 20 per cent per annum” he said.


The minister said this year the ministry was targeting one million visitors, adding that since the COVID-19 situation in the country had stabilised, there was the need to leverage it and promote the industry.
“Tourism is not just for fun and relaxation but also a window of opportunity for trade and investment,” he said.
The minister, therefore, urged Afrochella to use its network to bring more people into the country to help make tourism a propeller of the economy.
Appreciation
The Chief Executive Officer (CEO) of Afrochella, Abdul Karim Abdullah, expressed appreciation to the ministry for the confidence reposed in the organisation.
He said the minister’s request for 20,000 tourists was in line with their set goals for this year’s festival.
“We have a series of events that would not only get tourists to come to Ghana but also invest in the people and communities as well,” Mr Abdullah said.