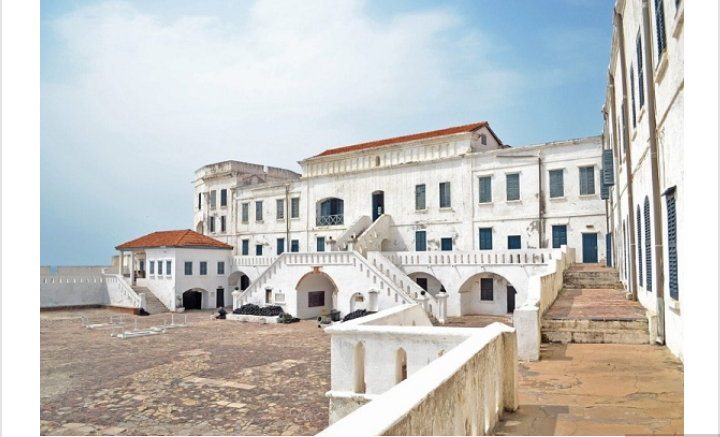 The COVID-19 pandemic has dealt a big blow to the operations of the Cape Coast Castle. For the first time, the castle, a monumental world heritage site, has been shut to tourists for more than two months leading to a loss in revenue.
For years its dark history helped many to reconcile their past with their present and to move ahead into the future in self-peace.

Its “Doors of Return” received many from the Americas and the Caribbean who spiritually reconciled with ancestors sold into slavery who were made to go through a “Door of no return” at the castle to board waiting ships to the unknown.

A world heritage monument acclaimed for its role in the infamous Trans-Atlantic Slave Trade, the Cape Coast Castle continues to receive many, young and old, high and not so famous “home”. It stands as a strong symbol and spiritual ground where many a descendant come to reconcile with the souls of their ancestors.

In 1957, after Ghana gained independence, the castle was handed over to the government and later to the Ghana Museums and Monuments Board.

In 2019, 400 years after the first recorded landing of a slave ship in Virginia, USA, the government of Ghana through the Ministry of Tourism and the Ghana Tourism Authority launched the “Year of Return” to allow all of African descent and more to return to the motherland.

Of significant symbolism in the “Year of Return” was the magnificent Cape Coast Castle which holds in its dark dungeons and bucolic cannon balls, tonnes of history for all of African descent.


The “Year of Return” is said to have raked in about US$1.9 million dollars in revenue generally.

The Cape Coast Castle began as a trade house constructed by the Portuguese in 1555.

Following Sweden’s conquest of Cape Coast, the Swedish Africa Company took over the place and constructed a permanent wooden fortress (fort) for trade in timber and gold.

Years later, the fort was rebuilt in stone after the Danes seized control from the Swedish.

The fort passed through the hands of the Dutch, local Oguaa chiefs, before being conquered by the British in 1664.

Over the years the fort was progressively used for the slaves, transforming into a castle that served as the seat of the British colonial governor by 1700. Now it is a world heritage site managed by the Ghana Museums and Monuments Board (GMMB).

The castle has over the years attracted many renowned people locally and internationally.

In 2019 after the government launched the “Year of Return” to mark the 400 years after slavery, many celebrities including actors Samuel Leroy Jackson, Danny Glover and Steve Harvey came to Ghana and visited the castle.

In 2009 the visiting American President, Barack Obama, was at the castle with his family.

However, the outbreak of COVID-19 is having a toll on activities at the world-renowned UNESCO heritage site.

As per the directive from the government the castle has been shut to tourists.

The Central Regional Head of the GMMB, Mr Ato Ashun, in an interview with the Daily Graphic, said after the “Year of Return” the management of the castle was expecting loads of visitors.

“Many of those who came to Ghana and visited the castle had advertised the facility well for us and this we anticipated would have brought in many more visitors. From all indications, this year would have been a really good year until COVID-19 smashed our hopes,” he stated.

Even with the pandemic and closure, Mr Ashun said many people still called to inquire whether the facility was opened.

No visitor, no revenue

However, the facility has been shut for more than two months and management does not know when it is reopening.

Mr Ashun noted that the facility’s source of income was basically from the visits and the closure meant the revenue sources had also been shut.

“This is a difficult time for us but we hope to go through,” he stated.

He said the castle currently had only a skeletal staff working to keep the place in shape.

“The artisans are available to do their normal routine maintenance such as painting the cannon balls,” he stated.

Mr Ashun said for now the GMMB was working on virtual tourism, where virtual visitors would be given a presentation on the facility and a virtual tour to sustain interest in the castle.

He noted that it was unfortunate the pandemic broke out at a time when the castle had begun to reap the fruits of the “Year of Return”. The “Year of Return” was launched to mark the 400 years of the first enslaved African arriving in Jamestown, Virginia.

“Our visits last year were huge. We saw visits we had not seen in the past 20 years and we were anticipating even greater numbers but the pandemic dealt us a big blow. We had about 20,000 visitors in December alone. We were expecting many more this year,” he stated.

As the castle and its staff are affected, so have the other businesses such as restaurants and artifact shops in the castle.

Mr Kobina Manu, a father of four who owns an artefact shop on the castle premises said things were bad. “I am hungry and so is my family because we have been out of business for more than two months. This is not a joke; the impact on our lives and families is too much,” he lamented.

During the visit to the castle it was noticed that the artefact shops were closed and the artifacts were gathering mildew. Patrons of the shops were mostly visitors to the castle. Now no one entered the castle and so there were no buyers.

Mr Manu said his dependents were all affected. “Every seller here is worse off. It is a worrying situation and we hope COVID-19 goes away soon and we get support to restart our businesses,” he stated.

The Akwaaba Spot, an eatery at the castle also remained closed; its chairs rested on the dusty tables.

Mr Ashun said the castle remained a major tourist site in the country and its closure impacted many people and enterprises in different ways.

He was, however, optimistic that after the pandemic all would be done to recover the time and revenue lost by embarking on effective marketing to get visitors to the castle.

“The economic impact of the closure is huge. I believe we would get back. It would take time but certainly the Cape Coast Castle would bounce back,” he stated.
Source: Graphiconline