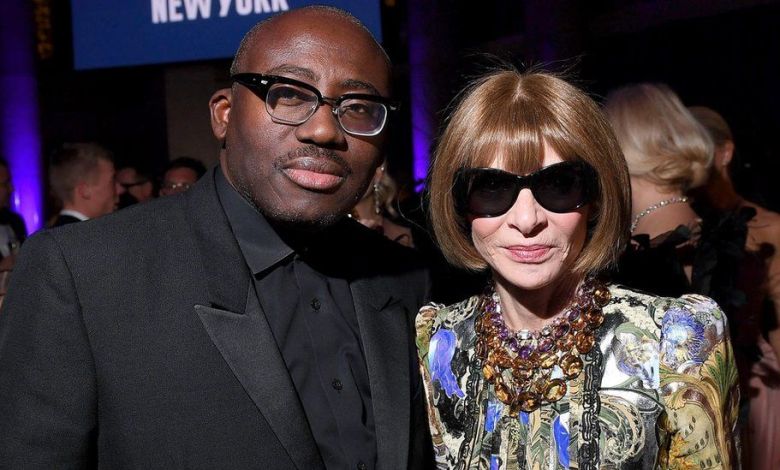 The editor-in-chief of British Vogue has said losing his eyesight is his biggest fear.

Edward Enninful, who has had poor vision for much of his life, has had four operations in recent years for problems including a detached retina.

This required him to spend weeks at a time looking at the floor, with his head down.

In an interview with BBC News, Enninful also revealed that he didn’t speak to his father for nearly 15 years.

The Ghanaian magazine editor, whose autobiography is released next week, also said he spent 14 years on an Alcoholics Anonymous (AA) programme.

Asked if he feared losing his eyesight, Enninful said: “It’s my biggest fear.

“I never had good eyesight anyway. I always had my minus 10 glasses and I had four retinal detachments [needing] surgery each time. Then three weeks looking at the ground in a dark room and not lifting up your head. And yes, it was very psychologically intense.

“But what I’ve also learned is… you don’t need perfect vision to create. You don’t need 20/20 vision to see images. So that’s the irony of it: though I have bad eyesight, I’m still able to create images that people seem to resonate with.”

Edward Enninful with Naomi Campbell and Kate MossIMAGE SOURCE,GETTY IMAGES
Image caption,
Enninful, pictured with Naomi Campbell and Kate Moss, has had poor vision for much of his life
Enninful also has the blood condition thalassaemia, causing regular bouts of severe pain, and for which he had several transfusions before coming to Britain from Ghana at the age of 13.

In Ghana, his mother ran a successful seamstress business and his father was in the military but the family decided to leave because of political unrest.

While his mother remained in Ghana for a while, Enninful and his five siblings moved to Vauxhall, south London, to stay in his aunt’s small flat. His father spent three years seeking asylum.

At the age of 16, Enninful was spotted on the London Underground by the stylist Simon Foxton, who said he had the potential to be a model.

He enrolled at Goldsmiths University after being encouraged by fellow model and future director Steve McQueen. But by then, he had a senior job on i-D magazine.

After confessing to his father that he’d been skipping university to pursue his dreams in fashion, his father threw him out of the house. They didn’t speak for 15 years, but have been reconciled now.

Enninful has also endured bouts of depression, and was on the AA programme for 14 years.

“I found fellowship [in the AA]. I found everybody was sort of even. It didn’t matter whether you were the head of a company or someone who slept on the streets. It just levelled everybody,” he said.

“It got very bad because imagine how I was, you know – I lost one home, which was Africa, and came to England. Then I lost a second home when I was kicked out. And then I went into the gay scene thinking I found my tribe and again, got so many rejections.”

In September 2019, the Duchess of Sussex guest edited British Vogue. Enninful describes her in his book, A Visible Man, as a “phenomenal editing partner”.

Asked about reports that Meghan asked for a 24-hour delay to publication so that American media could see her special edition first, he said: “No no, no, no, no…. nobody told us what to do… nobody really interfered with us.”

There has long been talk in the fashion and media industry that he is the favourite to succeed another Brit, Anna Wintour, as editor of American Vogue when she steps down. Wintour is 72 and has held the position since 1988.

Enninful said: “People love to speculate about mine and Anna’s relationship, but I’m so happy doing what I’m doing right now…. but you know, you never know what the future holds.”