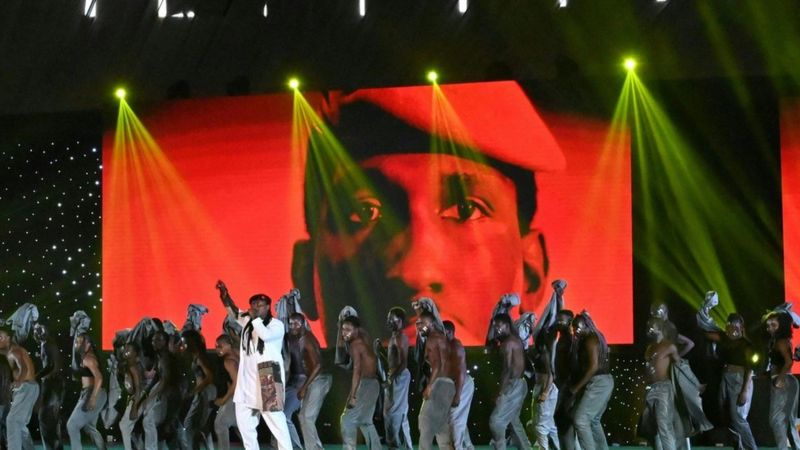 The 27th edition of the Pan-African Film and Television Festival of Ouagadougou (Fespaco) is under way in Burkina Faso’s capital.

Thousands thronged the Palais des Sports complex in the Ouaga 2000 district to witness the start of Africa’s largest film festival, which runs from 16 to 23 October.

Man with white paint on his chest which reads: FESPACO
IMAGE SOURCE,AFP
The event was initially planned for February this year, but was postponed due to the Covid-19 pandemic.

Fespaco, which started in 1969, is an internationally recognised festival that attracts enthusiasts from across the world to celebrate films largely produced in Africa by Africans.

A woman smiling with a head dress of fake oranges
IMAGE SOURCE,AFP
Image caption,The festival is the central cultural event on Ouagadougou’s calendar
Men standing with colourful body and face paint. They have the colours of the Burkina Faso flag


Security was tight in and around the venue, with the army positioned strategically across Ouagadougou.

Burkina Faso has been battling an insurgency by jihadist groups in the north and eastern regions since 2015.

“It’s not the first time that the Fespaco is facing [security] difficulties… So we will implement the same strategy but this time we are also taking into account the sanitary situation,” Alex Moussa Sawadogo, the new Fespaco delegate-general, told the BBC.

“In the face of the unprecedented security crisis, we remain standing,” said the Burkinabé Culture Minister Elise Foniyama Ilboudo Thiombiano.

IMAGE SOURCE,AFP VIA GETTY IMAGES
Image caption,Foreign Minister Alpha Barry greeted ambassadors at the Palais des Sports
Which films are competing this year?
Out of the 1,132 entries submitted across six categories, 239 films from 50 countries have been shortlisted.

Some 17 feature-length films will battle it out for the grand prize, the Golden Stallion of Yennenga, named after a beast in Burkinabé mythology.

The grand prize winner will be selected by an international jury headed by Mauritanian filmmaker Abderrahmane Sissako, who won France’s coveted César for best film in 2015 with Timbuktu.