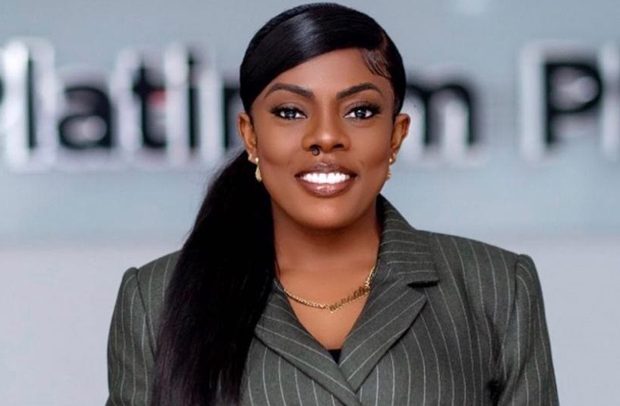 General Manager for Ghone TV, Nana Aba Anamoah has stated that she is not ruling out marriage in her lifetime.
According to her, she will get united one day but she will only do that when she is ready.
Nana Aba made this known while expressing her dissatisfaction with people who pressurize others to get married in a viral video from her recent interview with Accra Fm’s Nana Romeo.
This was after she was asked if she is worried that she is not married, following an allegation that Afia Schwarzenegger called her a “single” woman.
“Why will I be worried that I am not married? Are you worried that you’re not dead,” she questioned Nana Romeo who responded, “no.”
She then continued, “Exactly! So why? I mean no one can be forced to get married. I don’t think there is anyone in this world who says that oh as for marriage I hate it. No one will say if he or she marries, everything should come to standstill. If it happens it happens if it doesn’t happen it doesn’t happen. You don’t go around chasing shadows. I don’t think it is right for anyone to disturb anyone with marriage. Also, I don’t think that it is right for anyone to rule out marriage in their lives because there are great people out there who will make great companions.”
“What people don’t know is that…there are people who are married and they are very very happy. They are extremely happy and we’re happy for them. Some people are married and they are sad. Their lives have become worse and we want them out of those marriages. So I’m not ruling out marriage, I will marry when I’m ready,” she indicated.
However, Nana Aba who disclosed she is currently in a relationship was quick to caution people not to ask her to get married.
“But if anybody asks me and I love the response Lydia Forson gave to somebody on social media, I mean I don’t go around asking you that your age mates are dying so you should also die. So don’t tell me my age mates are getting married. Life is not a race, yeah,” she added.