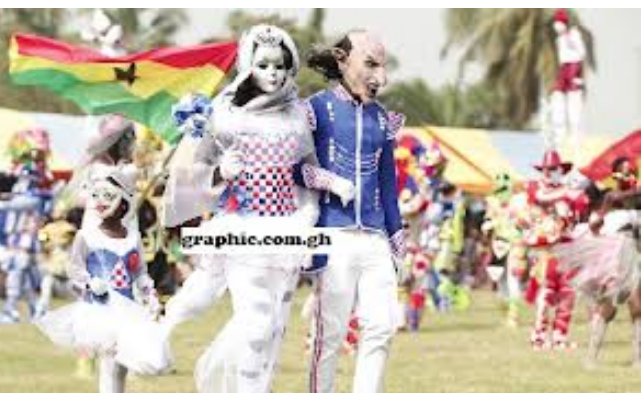 The tradition of masquerading emerged from contact with Dutch colonisers who introduced putting on masks and wearing fanciful attires to socialise in many coastal towns in Ghana.
The people of Winneba adopted and owned this practice by setting up various masquerade groups—as far back as the 1930s—to create elaborate characters and perform with marching bands for their townsfolk.
In 1957, Ghana’s first President, Dr Kwame Nkrumah, formalised the institution and sponsored the first parade to mark Ghana’s independence.
Indeed, the Fancy Dress and Masqueraders Festival is the first major festival of the year to be celebrated in Ghana. It brings together hundreds of people including foreigners from all walks of life to join the indigenes of Winneba in the Central Region for a colourful celebration on New Year’s Day.
‘Kaakaamotobi’
‘Kaakaamotobi’ festival, as it’s locally known, derives its name from the masks that are moulded to form fanciful or scary costumes and worn by the masqueraders to disguise themselves. The costumes are designed to provoke feelings or reactions such as fear, anxiety, or laughter through exaggerated features. Traditionally, the festival was reserved for men, which meant that a number of them engaged in cross-dressing. Today, women are allowed to participate in the festival, However, most of the male masquerades still put on wigs, earrings, frocks and gowns to look like women.
Celebration
The over 60 years old festival is celebrated on January 1 every year. It brings together five masquerade groups who showcase their beautiful and colourful costumes and thrill patrons with their dancing skills amidst brass band music. The event forms part of the culture of the people and also seeks to promote tourism in the area.
As part of the celebration, five participating groups; Nobles No. 1, Egyaa No. 2, Tumus No. 3, Red Cross No. 4 and Royals No. 5, engage in a stiff march past and dancing competition after which the best-performing groups are rewarded.
The festival which is usually held at the Advanced Park in Winneba, is organised by the Winneba Masquerade Federation with support from the Centre for National Culture (CNC) and the Effutu Municipal Assembly.