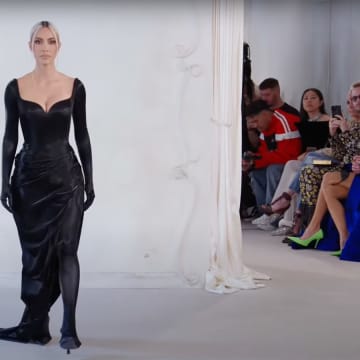 Kardashian joined a slew of A-listers walking for Balenciaga including Nicole Kidman, Dua Lipa, Bella Hadid and Naomi Campbell who were all cast in the show. Supermodel icon Campbell was seen bursting through the salon’s curtained door frames in a voluminous high-shine black ball gown complete with tall structured collar, while actor Nicole Kidman resurrected her modeling career from the 1980s for the occasion. The first half of the catwalk featured models wearing glossy black full-coverage facemasks, highlighting the famous faces even further.

Balenciaga’s decision to cast a star-studded show may be part of the brand’s mission to open up the exclusive world of couture to the mainstream. On Wednesday, the same day as its show, it unveiled a “couture store” inside the historic 1937 Parisian salon. CEO, Cédric Charbit, said in a press statement he wanted to demystify the “very closed universe” of haute couture by allowing younger consumers to see exclusive pieces up-close and learn about the all-important ateliers.