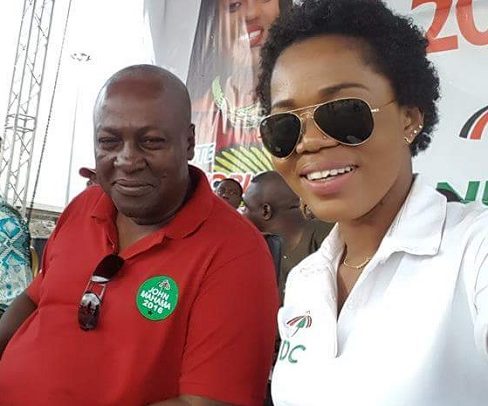 Controversial celebrity, Belinda Amoah, affectionately called MzBel has taken to social media to express her frustrations with former President John Mahama over his failure to honour a promise made to her.
In the tweet, MzBel expresses her unhappiness about Mr. Mahama’s failure to ensure that self-styled prophet Nigel Gaisie pays the compensation due her as a result of the rape she suffered in his (Nigel’s) hands some years ago.
She tweeted “With all due respect get involve if u don’t know what the deal is, cos there are witnesses and evidence”.
MzBel continues; “Mr. President I’ve been humble, I’ve been quite considerate, quite (quiet), and patient enough to stop using the ‘’Papano” issue as an excuse to punish me. When I have to chase people for what they owe me, it gets ugly! Be a man of your word……it’s been almost 6years”.
She also alleges that she was raped by Nigel Gaisie some six years ago.
MzBel further threatened to spill the beans about what Nigel Gaisie did to her but she was stopped by then President Mahama.
The Controversial celebrity said she was consequently promised that a huge sum of money would be made available to her as compensation for her ordeal.


But it’s been six years and the compensation has not been paid, hence launching her frustrations over the issue and threats to reveal whatever happened in graphic details that if the former President John Mahama does not honor that pledge he made on behalf of Nigel Gaisie.
Attached is the tweet from MzBel over the matter