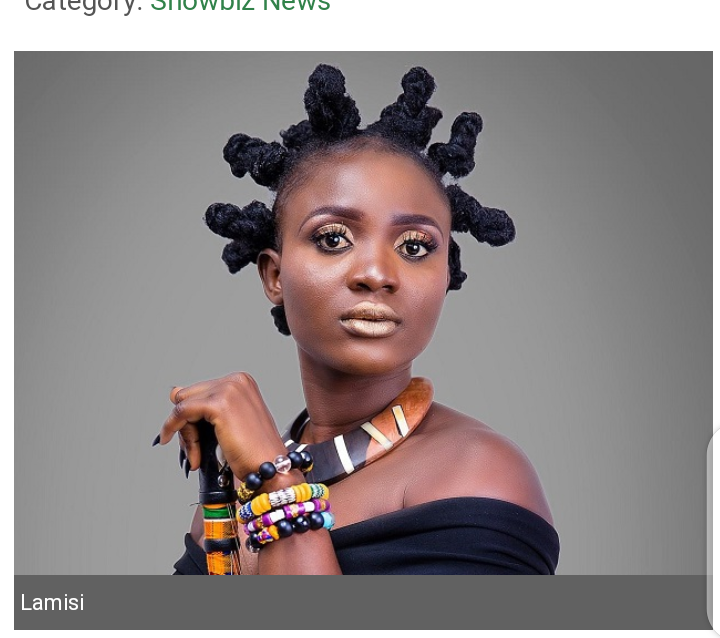 Many artistes work hard to gain recognition so when they get nominated for awards schemes, their dream is to win and they can feel proud. Naturally when they lose out, it is normal that they will be disappointed but for singer Lamisi, the opposite is the case.

Lamisi got three nominations at this year’s Vodafone Ghana Music Awards (VGMA); Female Vocalist of the Year, Songwriter of the Year and Record of the Year and though she lost in all of the categories, the Afro-Soul artiste told Graphic Showbiz that she was proud that she didn’t win anything.

“Getting the nominations was a great feeling. I wasn’t expecting an award, not because I didn’t deserve it, I very much deserved to win in all the categories, but my genre of music is not appreciated by many Ghanaians so I don’t achieve the same results as others.

“There are times you will not even get your work played because some media person will tell you that you don’t fit into their playlist, all these are challenges we are working on overcoming.

“It is because of this that I say I’m proud I got nothing, proud because I didn’t think I could be selected in any category. I was hoping to get just one nomination yet I got three and isn’t that a great way to start? Isn’t that an indication that gradually we are getting there?” she asked.


Read also: I am not bothered by negative reaction to my win – Kuami Eugene

Expressing how she felt about her nominations, Lamisi said, “I was surprised, the truth is that I was not expecting anything to come out though we filed for nominations. The reason is simple, people are yet to accept the kind of music I do so it came as a shock to my team.

“At the same time, I got very excited, it showed that I was doing something right and it was working. I mean every act would want to see his or her work being recognised so it was exciting not to me alone but the entire team. Just take a look at the artistes I was in the same categories with, big names who have done amazing things.

“It made me feel I was on the right path and need to push harder in that direction. Also, I felt encouraged that at least, my works have been noticed by the hard working VGMA board which consists of music experts in the country.

“Initially, I was expecting to make it into the Traditional Song of the Year category but I rather missed that and got three instead in different categories.”

Having spoken about the hurdles in her way, Graphic Showbiz asked Lamisi, real name Regina Lamisi Awiniman Anabilla Akuka, how she intended to overcome them and this was what she said.

“We keep trying to get more industry players’ attention to listen to my works. Because giving out your songs is not enough, you need to follow up to make sure the person whose attention you’re trying to seek has listened to your works.

“I remember after my album launch, we went round and distributed the album only to realise most of them didn’t listen to it. It was after my VGMA nominations that some of them took time off their busy schedules to listen to my songs and I started getting their remarks and reviews.”