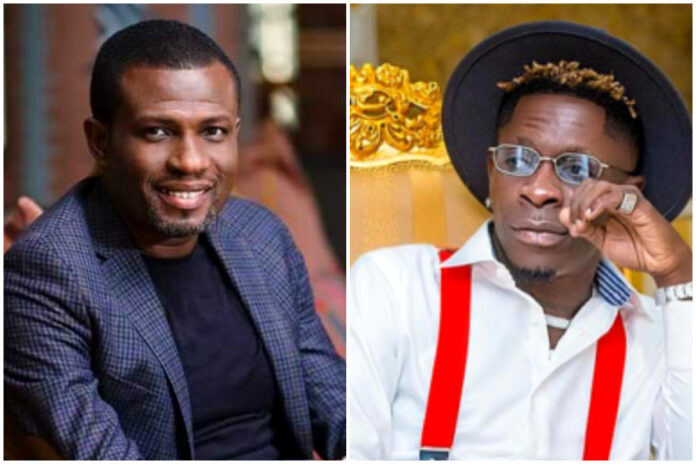 To many perhaps, it is one of Shatta Wale’s usual feuds with entertainment stakeholders but it appears there is more to the existing friction between the dancehall singer and the Deputy Tourism and Creative Arts Minister, Mr. Mark Okraku Mantey.


It appears that Shatta Wale harbours some bitterness towards Mr. Okraku Mantey as he (Shatta) often flares up at the mention of his name.


Addressing that particular subject on Metro TV’s Good Evening Ghana, the SM boss disclosed that his issue with the Deputy Tourism Minister dates as far back to his ‘Bandana’ album days when he (Okraku Mantey) was in charge of distribution.


Shatta said his anger towards Mr. Mark Okraku Mantey is because he never realized a penny from the popular album.

“I did not even make 50 pesewas from my song, I really suffered during my bandana days and in all these, Mark was in charge of my distribution. I have a problem with that guy and the government needs to take him from that post. Mark made me poor during my Bandana days. He was my distributor then and though that song was popular, I wasn’t making money from it,” he stated.


“A Japanese helped and funded my Bandana album. They had an agreement with Mark to distribute my songs and that was how I got to know Mark. I went to the investor and told him that people are playing my songs everywhere but I’m not making any profit and he directed me to Mark. I met an old man in Mark’s office who blasted me for being nosy and over-entitled. When I reported the man to Mark, he took sides,” he established.

The dancehall artiste added that they have since not had the best relationship and it’s even worse, now that Mark plays a major role in the entertainment industry.


According to the dancehall singer, as far as Mr. Okraku Mantey remains an authority in the industry, he (Shatta) will continually be sidelined from several business opportunities adding that the Deputy Minister has the habit of painting him black to foreign investors.