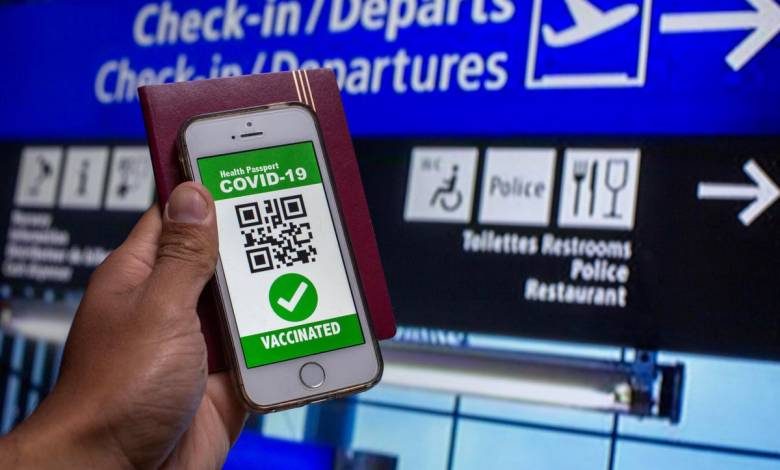 The e-passport shows proof of vaccination against COVID -19
An African Union vaccine e-passport has been introduced, which is intended to enable easier travel within and outside Africa.
The passport will be in digital format. A QR code will be scanned to show proof that someone has been fully vaccinated against Covid-19 and has a valid vaccine certificate.
It was launched on Friday, which is Africa Integration Day, at a virtual event attended by some African heads of state and other global health leaders.
Acting head of Africa CDC, Ahmed Ogwell, says the vaccine e-passport will soon be expanded to include other certificates such as Yellow Fever.
He added that the Africa CDC was also holding talks to link the passport to other global systems.
How COVID passport works
As time goes on, more countries are considering turning to Covid passports as a way of opening up and letting people travel.
These passports are usually accessed via an app on your phone or in some cases, paper versions are available.
Some nations have already installed their own versions of a Covid passport which has allowed people to attend large scale events. But with some countries lagging behind with vaccinations, there is concern that some could be left behind.
Here’s how a range of countries have adapted vaccine passports and what they involve.
UK
At the moment, “higher risk” settings such as nightclubs don’t have to ask for proof of vaccination.
However, Prime Minister Boris Johnson has announced plans “to make full vaccination the condition of entry to nightclubs and other venues where large crowds gather” by the end of September.
Under these new measures, people would show proof of vaccination by using the NHS Covid Pass app in England.
The NHS Covid Pass – or equivalents in other parts of the UK – will also allow fully vaccinated adults to avoid quarantine when they return from most amber-list countries. But even if they have the pass, they will have to self-isolate on arrival in the UK from France.
According to the government, more than 30 countries, including Greece and Spain now accept the pass but holders must check their destination’s entry rules before booking and keep checking before travelling.
EU
An EU vaccine “passport” is being introduced across all 27 member nations – plus Switzerland, Iceland, Norway and Liechtenstein.
Citizens of these nations can download it or obtain a paper copy – at no cost. It is also available to non-EU nationals living legally in member states who have the right to travel to other member states.
Because the UK is no longer in the EU, the certificate is not available to most Britons.
The certificate can be issued if someone has been vaccinated, recently had a negative Covid test or recently recovered from the virus.
Anyone holding the certificate should be exempt from testing or quarantining when crossing a border within the EU.

Other EU nations also have their own certificate or vaccine passport.
France
Authorities have set up a health pass that will allow people to access restaurants, bars, planes and trains.
At present, venues that accommodate more than 50 people already require proof of vaccination or a negative Covid test.
The pass will be required by all adults from the beginning of August and include children over the age of 12 from 30 September.
In order to obtain the pass, people must have proof they are fully vaccinated, recently tested negative or recently recovered from the virus.
On 24 July, about 160,000 people protested across the country against the Covid pass and mandatory vaccinations for health workers.
Israel
Israel introduced a vaccine pass earlier this year. It required people to show proof of either vaccination or having recently had the virus. The pass helped increase uptake of the vaccine, especially among younger people.
After infection rates declined, authorities decided to end the scheme.
But the government has now announced plans to reinstate the system amid a recent surge in cases.
The green pass system will only allow those over the age of 12 who are vaccinated, recovered from Covid-19 or who present a negative test result to attend large events and enter certain public spaces, the Times of Israel reports. The new pass will come into effect from 29 July.
IMAGE SOURCE,REUTERS
Image caption,
User shows Israel’s green pass app on their smartphone
The pass will apply to cultural and sporting events, gyms, restaurants and dining halls, conferences, tourist attractions and places of worship.
China
China introduced a QR code system last year which categorised people into different colours. A green colour allows people to move around without restrictions while someone with a yellow code may be asked to stay at home for seven days.
The codes are a combination of big data and information submitted by the users themselves.
Many public spaces in China require people to show their QR code in order to gain entry.
In March, China launched a digital health certificate that shows the holder’s vaccine status and test results. The certificate is available to foreigners in China as well as Chinese nationals. It is hoped that Chinese citizens will be able to use the certificate as a vaccine passport in other countries in future.
It’s not yet clear which countries China is in discussions with to get its certificate recognised.
IMAGE SOURCE,REUTERS
Image caption,
A green QR code allows people to gain access to a range of public spaces
Many countries have opted not to have a vaccine passport.
US
In April, the White House ruled out introducing mandatory federal Covid vaccination passports, saying citizens’ privacy and rights should be protected. However four states have active vaccination apps, according to MIT Technology Review.
But some states have also opted to introduce their own measures to try to increase vaccination rates.
California will require all state employees and health care workers to show proof of vaccination or be tested weekly from next month. New York City will adopt a similar measure from mid-September requiring its municipal workers – including police officers and teachers – to be vaccinated or face weekly tests.
Australia
At present, inoculated Australians have a digital certificate on their phones but it has no rights attached to it.
The country’s tourism minister Dan Tehan has said that a vaccine passport could give people “the right to be able to travel across borders when there are lockdowns, or if there are parts of a state which have been locked down, because of an outbreak”.
He also said that giving more freedoms to people who are vaccinated would encourage more to get the jab.