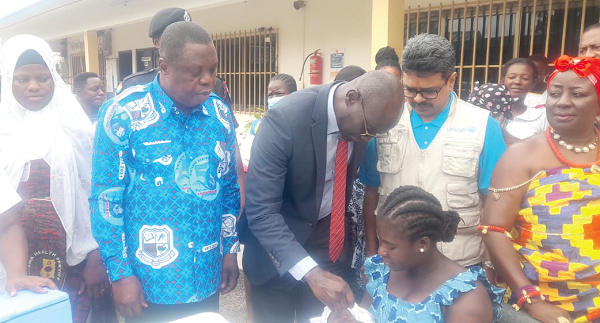 The Bono East Regional Minister, Kwasi Adu-Gyan, announced this when he launched the second round of the exercise at Kintampo last Thursday.


The Regional Health Directorate has targeted to immunise a total of 264,998 children under five years during the second round of the exercise.

Launching the exercise, Mr Adu-Gyan appealed to parents and communities to avail their children of the opportunity to vaccinate.

The exercise will be carried out in schools, health facilities, markets, lorry stations, churches, mosques and from house-to-house by mobile teams.

For his part, the Bono East Region Director of Health, Dr Adomako-Boateng, said polio was highly preventable and advised all parents not to be afraid of any adverse effects of the vaccination.

“The vaccines are safe and no parent or community should entertain any fear,” he stated, adding that during the first round no adverse incident was recorded.

He called on people in the region to observe proper hygienic practices to prevent the outbreak of diseases since prevention was better than cure.

The Chief of Health and Nutrition of the UNICEF Ghana Country Office, Dr Mrunal Shetye, commended Ghana for putting in place a robust health system to combat diseases.


He stated that the over 100 per cent success rate of the Bono East during the first round of the exercise was highly commendable.