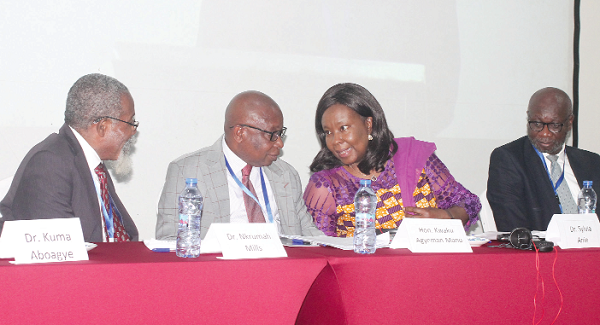 The Ghana College of Physicians and Surgeons (GCPS) has secured a £10-million funding to help boost the fight against non-communicable diseases (NCDs) in West Africa.
The project will be executed mainly through high-level applied research.

The funding was awarded by the National Institute for Health and Care Research (NIHR), the UK government’s major funder of clinical, public health, social care and translational research work in low and middle-income countries.

The GCPS has, consequently, set up a centre, the NHIR Global Health Research Centre for NCD Control in West Africa, to lead the five-year project, which was launched in Accra yesterday.

The centre comprises the GCPS and the London School of Hygiene and Tropical Medicine (LSHTM) as the co-lead institutions, working in partnership with other institutions, namely: the Ashesi University, Ghana; the Catholic University of West Africa (UCAO-UUB), Burkina Faso, and the Research Centre for Local Development in Niger (LASDEL).


The centre will develop the skills of local researchers and clinicians, as well as run a Doctor of Philosophy (PhD) and a master’s programmes to provide formal training for students in all three implementing countries.

The project will, among others, build capacity for high-quality research to inform improved prevention, diagnosis and the treatment of inter-connected NCDs, namely: hypertension, diabetes and mental health-co-existing stress, anxiety and depression.

The launch brought together policy makers, scientists, researchers and officials in the health sector from the UK and the various West African implementing countries.

The Minister of Health, Kwaku Agyeman-Manu, said the timing of the project was apt because NCD prevalence was increasing globally, making it currently the leading cause of death and disease burden worldwide.


“We just had a conversation on NCDs at the just-ended United Nations General Assembly meeting. According to the World Health Organisation (WHO), heart diseases and stroke, cancers, diabetes and respiratory diseases now outnumber infectious diseases as the top killers globally, accounting for about 74 per cent of all deaths,” he said.

“These conditions are mostly due to modifiable risk factors, which include tobacco use, unhealthy diet, physical inactivity, harmful use of alcohol and air pollution.

Unfortunately, our disease control structures in West Africa have been traditionally driven by the burden of communicable diseases,” he added.

The minister said, for instance, that Africa was off track in achieving the WHO recommendations for tackling NCD targets for the 2015 and 2016 deadlines.


“It appears that despite the initial achievements by African countries towards fulfilling the commitments in the 2011 UN Political Declaration and the 2014 outcome, Africa’s commitment to implement the NCD policy responses has waned,” he said.

It was clear that a scientific approach by the sub-region was required to improve the health and well-being of the population in West Africa, Mr Agyeman-Manu said.


A joint overview of the project, put together by the Co-directors of the centre, Prof. Irene Agyepong, the representative of the GCPS, and Prof. Tolib Mirzoev, the representative of LSHTM, said the proposal responded to high demand from policy makers, civil society organisations and communities, building on their strong policy links and stakeholder mapping conducted during proposal development.

“Our goal is to contribute to improved health in West Africa through improving capacity for applied research to improve prevention, diagnosis and management of three connected NCDs: hypertension, diabetes and common mental disorders (anxiety and depression),” it said.

The President of the International Union of Immunological Societies and Chairperson of the NIHR Global Health Research Centres Funding Committee, Prof. Faith Osier, described the initiative as ground-breaking.

“It’s the first time we’ve seen anything like this level of investment in NCD research in low and middle-income countries,” she said.

She said research was at the heart of the innovation needed to address the challenges, and that the establishment of the centre was a timely and welcome effort to make a difference.