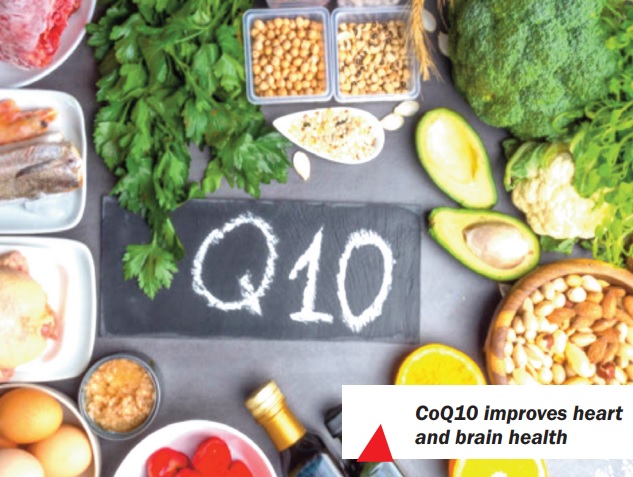 CoQ10 improves heart and brain health
Heart failure (HF) is a public health issue of global importance.In Ghana, a study by Amoah and Kallen (2000) revealed that the main causes of heart failure were hypertension (21.3 per cent), rheumatic heart disease (20.1 per cent), and cardiomyopathy (16.8 per cent).
Additionally, congenital heart disease and coronary artery disease accounted for 9.8 and 10 per cent of cases, respectively.

Despite the existence of pharmaceutical or conventional approaches to managing cardiovascular related diseases, there are natural approaches which have equally proven to be effective.

One such natural remedy is the ingredient,CoQ10.

Below are scientific reviews on this ingredient in cardiovascular management.

CoQ10 is a vital nutrient which works like an antioxidant in the body.


In its active form, it is called Ubiquinone or Ubiquinol.

CoQ10 is found in the human body, particularly, in the heart, liver, kidneys and pancreas.

It is stored in the mitochondria of your cells, often called the cells’ “powerhouse,” which is why it is involved in energy production.

In a study by Mortensen et al.,(2014) involving 420 people with heart failure, treatment with CoQ10 for two years improved their symptoms and reduced their risk of dying from heart problems.

Another retrospective study was conducted by Morisco et al.,(1993) which involved 641 people using CoQ10 or a placebo for a year.

The researchers found that the CoQ10 group had been hospitalized less frequently for worsening heart failure and had fewer serious complications.

For those on pharmaceutical drugs such as statins, CoQ10 supplementation may be useful, as it deals with the side effects.

One review by Barbara (2002) reports that CoQ10 has potential for use in prevention and treatment of cardiovascular disease, particularly hypertension (high blood
pressure), hyperlipidemia, coronary artery disease, and heart failure.

Further clinical trials are warranted, but because of its low toxicity it may be appropriate to recommend coenzyme Q10 to select patients as an adjunct to conventional
treatment.

A study by Conklin,(2005) found that supplementing with CoQ10 during cancer treatment may help to increase the cancer-killing potential of these medications (like doxorubicin and daunorubicin).

There is also evidence that CoQ10 can protect the heart from DNA damage that can sometimes occur from high doses of chemotherapy medications.

Another study by Hertz and Lister (2009) also found that CoQ10 may improve survival rates in end-stage cancers.

The interesting thing is that, these studies are far from hard proof, but they are encouraging beginnings to the thought that CoQ10 supplementation may help
improve survival with certain cancers.

Rusciani et al.,(2007) in their study indicated that supplementing with CoQ10 may help reduce the chance of cancer recurrence.

A retrospective study by Zahedi et al.,(2014) further found that those with type 2 diabetes who take CoQ10 for 12 weeks significantly reduced their fasting blood sugar levels and hemoglobin A1C.

Finally, Abdali et al.,(2015) reports that CoQ10 averts diabetes by stimulating the breakdown of fats and reducing the accumulation of fat cells that could lead to obesity or type 2 diabetes.

A study by Weber et al.,
(1997) found that CoQ10 is
absorbed in capsule form or
through foods. Hence,the
following foods contain CoQ10:
• Organ meats: Heart,liver
and kidney
• Some muscle meats: Pork,
beef and chicken
• Fatty fish: Trout,herring,
mackerel and sardine
• Vegetables: Spinach,
cauliflower and broccoli
• Fruits: Oranges and
strawberries
• Legumes: Soybeans,lentils
and peanuts
• Nuts and seeds: Sesame
seeds and pistachios
• Oils: Soybean and canola
oil
CoQ10 supplement dosage
An article by Griffin (2021)
recommends 50–1,200
milligrams per day.Most
supplements fall within the
100–200 milligram range.
Alternatively,90 milligrams
up to 1,200 milligrams is also
acceptable.This larger dose has
typically been used only to
study the neurological benefits
of CoQ10.
Most successful studies have
used between 100 – 300
milligrams (Levy,2019).
From studies,CoQ10
improves heart and kidney.