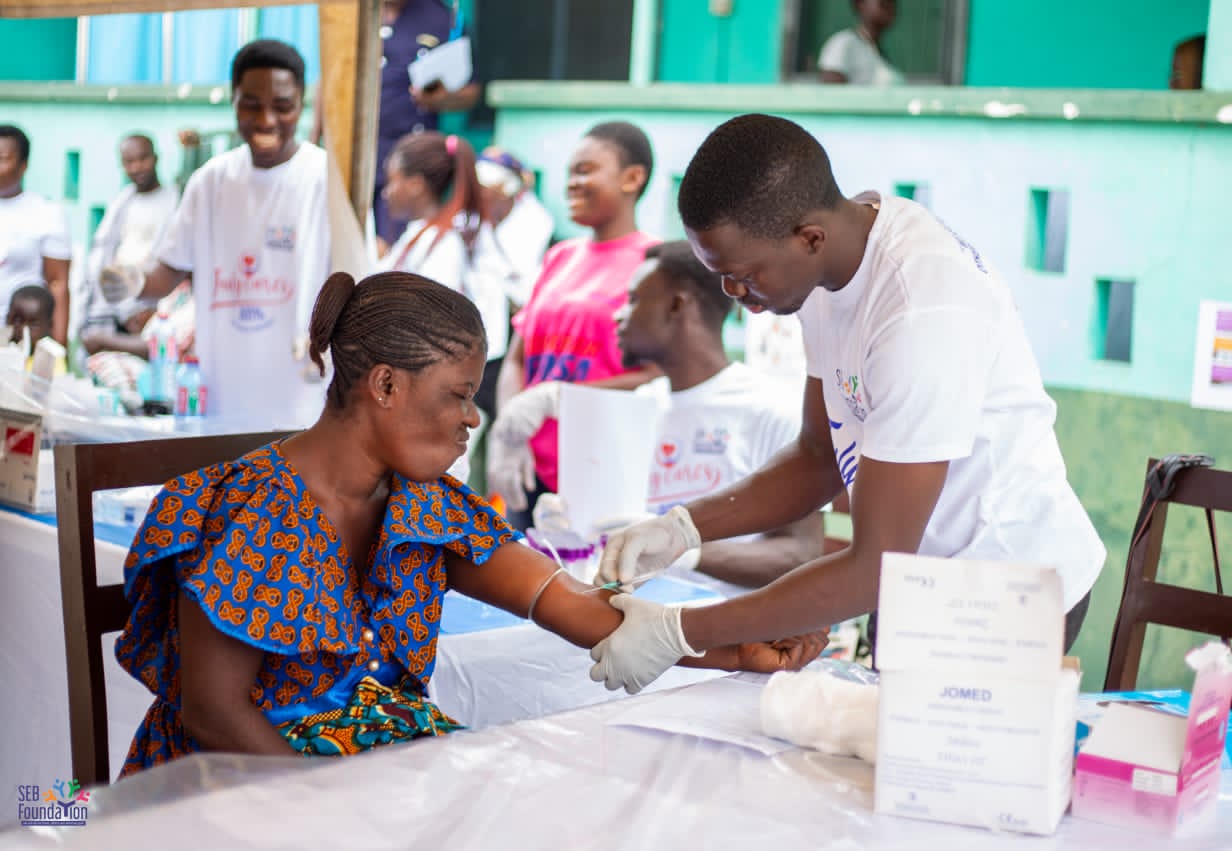 SEB Foundation Ghana, a non-governmental organisation in the Western Region has called for regular public sensitization on blood disorders and related diseases especially to persons living in rural communities.
It said public health and awareness creation about disorders such as anaemia, haemophilia, and sickle cell disease would lead to the protection and improvement in the health of people and their communities.


Speaking at the free screening programme as part of its flagship project, July Cares, the Director of the foundation, Mr Sebastian Blay, said the focus was to help people learn more about sickle cell disease and support them.

The sensitization covered eight communities of New Town Area Council of Avolenu Effasu, Mangeya, Ezimintiun, Mepasem, Anlomatuope, Jaway, Jaway-Wharf all in the Jomoro Municipality, was also aimed at encouraging the communities to prioritise and the need to use preventive healthcare approach and avoid self-medication.

The regular awareness he said would lead to the achievement of nourishing society by promoting healthy lifestyles, detecting and preventing as well as responding to infectious and other blood disorder diseases.


The screening programme was in collaboration with the Jomoro Municipal Health Directorate.

More than 120 residents comprising children under two-years, adults and the aged who availed themselves were screened.

June 19 has officially been designated as World Sickle Cell Awareness Day and observed annually with the goal to increase public knowledge and an understanding of sickle cell disease and the challenges experienced by patients and their families as well as caregivers.

“However, beyond the annual observation, there is the need for sustained awareness creation to ensure that people especially those at the hard to reach areas are made to understand the intricacies of the Sickle Cell and its management,” he said.

SEB Foundation Ghana he said decided to visit Jaway Wharf, a border town in the Jomoro Municipality, which he said is very strategic especially for those in the smaller parts of Jomoro to understand various blood disorder diseases.


“We aside the health screening raise awareness about sickle cell disease and the risks of self-medication as the foundation’s contribution to the achievement of Sustainable Development Goal 3, Good health and well-being, at the Jaway Wharf, a border community,” he said.

Mr Blay urged the beneficiaries to prioritise their health and well-being at all times, saying, “We are all we have, others are what they give and we hope that the screening would make a significant difference in the lives of the people living in the Municipality, the riverine communities and other adjoining districts.”

A member of the medical team, Dr Araba Odum of the Effia-Nkwanta Regional Hospital during the interactive session urged the people to get regular check-ups and avoid self-medication.

“We will not always come around for the screening, it is good you are taking advantage of the current opportunity screen yourselves – but make it a point to ensure regular checks,” she said.


The Odikro of Jaway Wharf, Nana Tanoe Kpolley, commended the foundation for the assistance it provided the community through its development projects.

“One significant thing about the sensitization and the screening is that, we have learnt about the Sickle Cell and what we should do and not do, where to seek help among others, advice to my people,” he said.