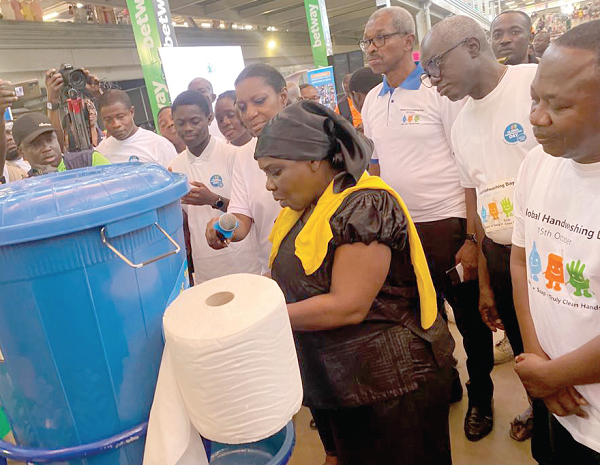 The Minister of Sanitation and Water Resources, Cecilia Abena Dapaah, has urged handlers of food items, particularly those who sell in markets, to always wash their hands with soap under running water to prevent the contamination of their wares.
She said as people who “deal in foodstuffs, you have a very critical role to play in ensuring that our food items are safe and thereby contribute to the total health and wellbeing of the larger population”.

She said if everyone practiced good handwashing hygiene and washed their hands at least five times daily with soap under running water, it could save one million lives annually worldwide.

Ms Dapaah made the appeal last Saturday during the commemoration of the Global Hand Washing Day in Kumasi.

It was dubbed: “Unite for Universal Hand Hygiene”, and was organised by the Community Water and Sanitation Agency, with support from the Church of Christ under the auspices of the ministry.

Ms Dapaah explained that the hands were principal carriers of disease-causing pathogens from person to person either through direct contact or indirectly through surfaces.

She said proper handwashing with soap under running water, therefore, helped to remove germs from the hand and prevented the transmission of respiratory infections and diarrhoeal diseases, including cholera.

She said good handwashing hygiene had multiple benefits, including improved wellbeing, dignity, educational fulfilment and productivity, to the individual and the society at large.

She, therefore, appealed to the public to make handwashing with soap a priority in their daily activities to provide a better health for the present and future generations.


“Let us all resolve today to start creating awareness on the handwashing with soap, and also adopt the practice of washing hands at the critical times, especially after visiting the toilet and before we handle food.

“Everyone has a role to play, especially in our efforts to shift awareness on hand washing with soap towards sustained behaviour change. We need to unite for universal hand hygiene, and advocate hand hygiene as an essential element for health and development,” she said.

As part of the efforts to promote good handwashing hygiene among the traders at the market, the minister donated 10 sets of handwashing items, including Veronica bucket, dust bin, tissue and liquid soap to the leadership of the market.


The Chairman of the Kejetia Traders Association, Nana Kwasi Prempeh, expressed gratitude to the minister for the gesture, and asked that more be added to cover the entire market.