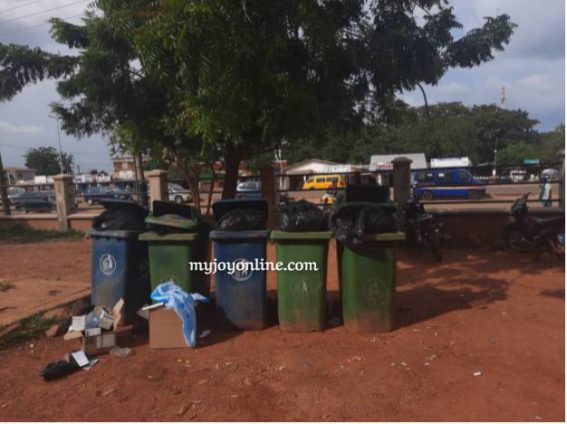 Garbage has taken over the Tamale Teaching Hospital (TTH) after three days of the ongoing strike by the Health Services Workers Union.
The various wards are unkempt, washrooms are stinking, creating an unbearable situation at the health facility.
From the entrance of the hospital to the corridors of the various consulting rooms, the compound of the TTH looks as if the place has not been cleaned for ages.
The stench from the drains laced with algae and maggots has taken over the entire hospital making it difficult for patients and caregivers to breathe.
Dustbins full of rubbish are beginning to decompose and flies can be found everywhere. Small trashcans placed at vantage points in the compound have overflowed, and in some cases, animals have poured the content on the ground. As a result, there is litter everywhere, with the whole environment in a mess.
A caregiver, Madam Ashia, told JoyNews she has been at the hospital for the past three days and the washrooms are the worst affected areas.
She said one can easily pick infections during a visit to the washrooms.
“The sanitation situation is terrible. You will go and urinate there and pick the infection,” she said.
Madam Ashia added that the place is slippery, thereby endangering the lives of the patients who already are finding it difficult to walk.
She said the gutters are filled with plastic bags, cotton wool, flies and larva, and the mere sight of these is enough to make one throw out.
Madam Ashia appealed to the government to listen to the workers’ concerns and ensure they returned to work.
Another caregiver, Afa Iddrisu, said what he does for his patient is to clean him on the ward instead of allowing the patient to use the bathroom.
” As for our patient, he has no option, so he has to stay in there, and what we do is clean him instead of allowing him to use the bathrooms. The bathrooms are places you just can’t enter,” he said.