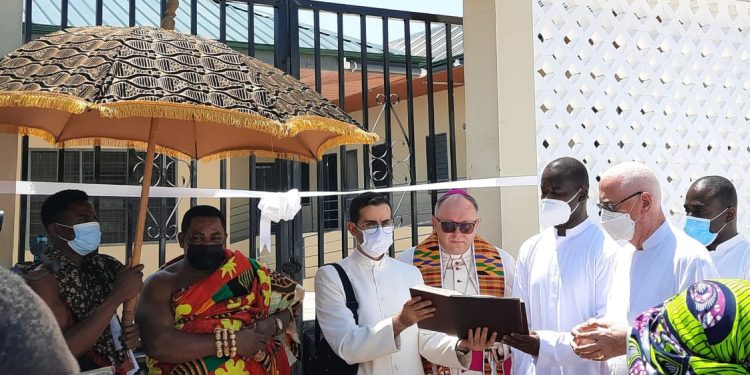 The Lepers Aid Committee says 260 cases of leprosy are recorded annually in Ghana, with the Northern Region topping the chart.

According to the committee, the worrying trend will be curtailed soon with the establishment of a state-of-the-art research centre, which is the first of its kind in West Africa at the Weija Leprosarium. The facility is to help conduct research into finding a lasting cure to leprosy.

“This research centre is the only one in West Africa and the second one in the whole of Africa apart from the one in Ethiopia. And they will be doing research into leprosy and how to find a cure for it. It is sad because every year we get over 260 active cases of leprosy, with the Northern Region topping the chart. We are hoping that the establishment of the centre will help eradicate the disease,” father Andrew Campbell, founder of the Leprosy Aid Committee told Citi News.

Speaking at the commissioning of the research centre, the Mother Teresa apartment for lepers and other adjoining facilities, Father Andrew Campbell said it was time for corporate Ghana to support the Leprosarium.

He lamented that the facility spends approximately GH¢500, a month on each leper, making it difficult to take care of them.

He also wants the GH¢30 a month it receives for each leper from the Livelihood Empowerment Against Poverty program (LEAP) be adjusted to suit the high demands.

“The money we receive from the Livelihood Empowerment Against Poverty program is not enough. Each leper gets GH¢30 a month on the LEAP fund. It is woefully inadequate, we need support,” Father Campbell complained.

The Research centre and other facilities were built with support from the GETFund from the Weija Gbawe Municipality and Municipal Chief Executive for the area, Patrick Kumor.

Mr. Kumor indicated that the assembly is ready to support the Leprosarium with funds from the Disability Fund.

He also added that the assembly is ready to build a children’s hospital at the Leprosarium, which will address the many challenges confronting children.

“The building of the research centre and other residential apartment was a promise made by President Akufo-Addo. The assembly also has a fund for persons with disabilities, and we have asked them to apply for it,” Municipal Chief Executive for Weija Gbawe Patrick Kumor said.

The Member of Parliament for the area, Tina Naa Ayele Mensah, who was present at the event also promised more support for the centre, adding that she will liaise with the assembly in doing so.