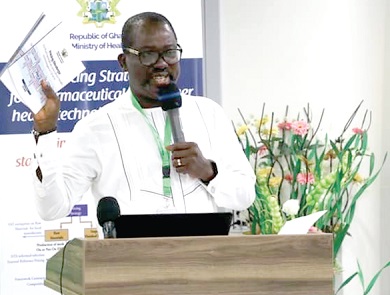 The Ministry of Health (MoH) has launched a national pricing strategy for pharmaceuticals and other health technology sectors.
The innovative strategy, which was developed through a wide consultative approach, aims at optimising pricing challenges and their ripple effect on consumers to sustain public health interest and a vibrant private sector.

It also seeks to establish a transparent framework on the pricing of medicines to ensure it is optimised for all stakeholders, including the financial sustainability of the National Health Insurance Scheme (NHIS).

At the launch of the strategy in Accra yesterday[June 29, 2022], the Minister of Health, Kwaku Agyeman-Manu, in a speech read on his behalf by the Chief Director of the (MoH), Kwabena Boadu Oku-Afari, said sustainable access to medicines and health technology was in line with the agenda of the ministry to deliver universal health coverage.

Access
According to the minister, access to medicine was compromised when its prices were excessively high, thereby creating a financial barrier to access, especially for the poor and the vulnerable.

“The ministry introduced the third edition of the National Medicine Policy (NMP) in 2017, which recommended several policy interventions to help optimise medicine pricing for the benefit of the patient, the health insurance scheme, private sector players and businesses, as well as the health system,” he said.


Equity
The Country Representative of the WHO, Dr Francis Kasolo, in a speech read on his behalf, said equitable access to essential medicines was crucial to patient health outcomes, including a reduction in mortality.

He said about one-third of the world’s population did not have access to essential medicines due to the non-availability of medicines, coupled with high prices.

While pledging the WHO’s continued support, Dr Kasolo called for data generation for pharmaceutical pricing and information to inform decision-making.

He said carefully planned and well thought-out policies and strategies could guide well-informed and balanced decisions to achieve affordable access to health products.

Dr Kasolo commended the government for the development of the strategy, which he said would make medicines more affordable to the citizenry.


Affordability
An executive council member of the Chamber of Pharmacy, Kofi Addo-Agyekum, said the prices of medicines could be stable and affordable if macroeconomic fundamentals, such as inflation, exchange and interest rates, were handled well and payments for supplies made on time.

He proposed a payment tenure of 30 to 60 days after full supplies to ensure the protection and sustainability of the private sector, saying “the private sector can play its role effectively when such parameters that erode the value of its financial resources are checked”.

Mr Addo-Agyekum further appealed to the government to ensure early release of funds to the National Health Insurance Authority (NHIA).