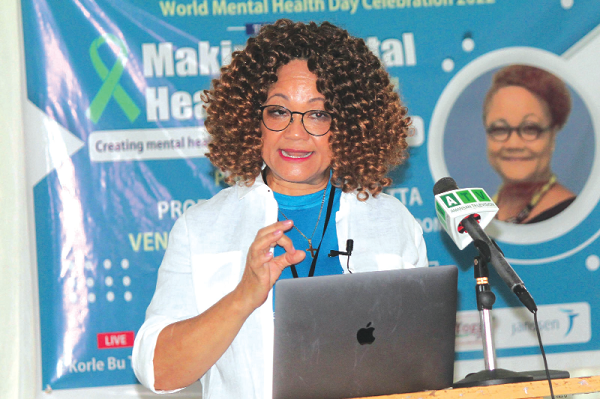 Psychological distress, a mental health condition, costs the country about seven per cent (GH¢8.6 billion) of its Gross Domestic Product (GDP), a clinical psychologist, Professor Angela Ofori-Atta, has disclosed.
She attributed the loss of national revenue to the many hours and days of unproductiveness because workers were in psychological distress.

Presenting a paper at a lecture to commemorate World Mental Health Week by the Department of Psychiatry of the Korle Bu Teaching Hospital in Accra last Monday, Prof. Ofori-Atta quoted the findings of a research conducted by a group of scholars from the University of Ghana and the Yale University in the US to indicate that 55 per cent of the population reported some form of psychological distress.


“When you calculate the number of days people say they went to work but were unable to do anything — one hour at work lost, half a day lost — when we calculate all this lost productive time, the country is losing at least seven per cent of its GDP to psychological distress,” she said.

She spoke on the topic, “Prioritising mental health and wellbeing for all”, which is the theme of this year’s World Mental Health Day.


Throwing more light on the survey, dubbed: “Ghana health and socio-economic survey”, Prof. Ofori-Atta, who is the immediate past Head of the Department of Psychiatry of the Korle Bu Teaching Hospital and the University of Ghana Medical School, described it as the first national mental health survey.

She said the survey did both economic analyses and psychological measurement of distress and established that the prevalence of psychological distress was 18.7 per cent.

The condition, she noted, was more prevalent among lower-income groups, the less-educated and less-empowered women.

Prof. Ofori-Atta said the country had to improve on its investment in the mental health and wellbeing of the population.


As part of the many interventions, she suggested that the country could adopt cognitive behavioural therapy, which is a psycho-social intervention that aims to reduce symptoms of various mental health conditions, primarily depression and anxiety disorders.

It focuses on challenging and changing cognitive distortions (such as thoughts, beliefs and attitudes) and their associated behaviours to improve emotional regulation and develop personal coping strategies that target solving current problems.

Although it was originally designed to treat depression, its uses have been expanded to include the treatment of many mental health conditions, including anxiety and substance use disorders.

Prof. Ofori-Atta said the country could also adopt the use of Gross Domestic Happiness Index (GDHI) which, among others, measured the collective happiness and well-being of a population.

She said it also measured how people felt about their lives, using happiness as the measure of development.


“Gross national happiness was designed in an attempt to define an indicator that measures quality of life or social progress in more holistic and psychological terms than only the economic indicator of GDP,” she said.

“We have the Ghana Statistical Service conducting the living standards survey over every five years and so it will not be difficult for the country to actually have a happiness index,” she said.

Citing some benefits Bhutan derived from the index, she said the very poor country, based on the adoption of the index, was graduating out of the least developed country category, had been able to track what mattered to its population and gained happiness for its people and wealth for the nation.

“Growth increased between 3.1 and 8.1 per cent between 2011 and 2019. This shows the association between focusing on the happiness of people and the wealth of a nation,” she said.