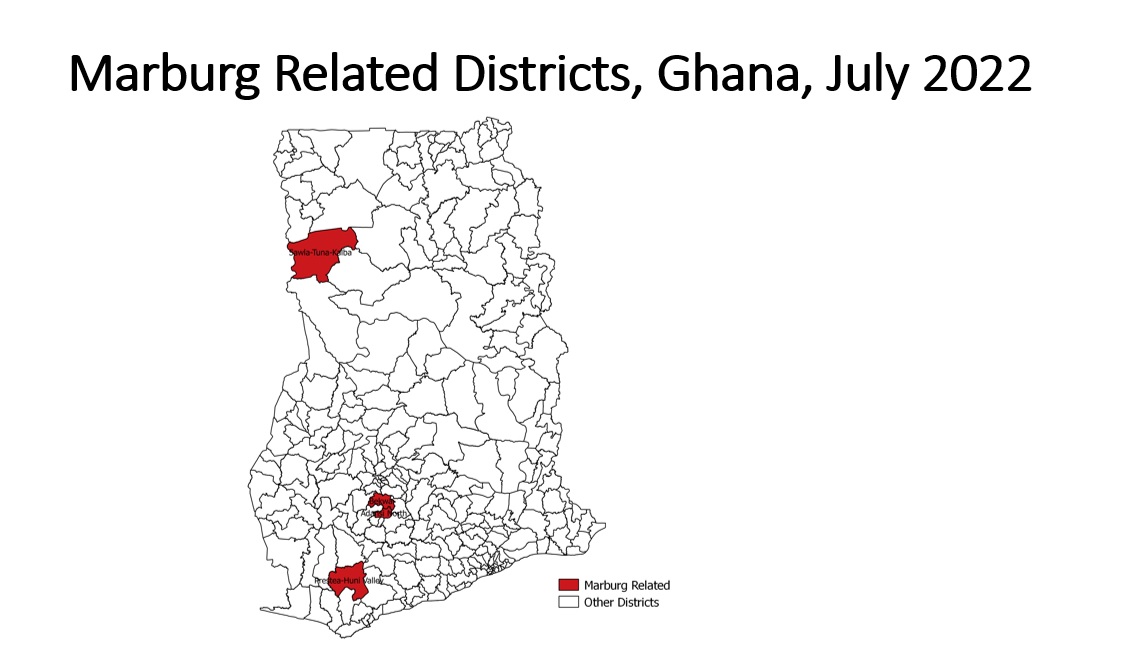 The Ghana Health Service (GHS) has said one close contact in the new Marburg Virus Disease cases in Ghana reported symptoms after the maximum incubation period, the person tested positive together with his close contact (yet to be corroborated by IPD) but died on July 21, 2022.
Currently, 40 additional contacts have been identified in the Savannah Region and are being followed up.

Eleven of the 40 contacts are Health Care Workers (HCW) and that daily monitoring of temperature and general health and wellbeing being undertaken by healthcare staff in the affected district.

The Director-General of the GHS, Dr Patrick Kuma-Aboagye made this known at a press briefing in Accra on Sunday (July 24, 2022).

The GHS on June 26, 2022, identified a suspected case of Viral Haemorrhagic Fever whose date of onset was June 22, 2022. It resulted in two fatalities.

The results were subsequently corroborated by Institut Pasteur in Dakar (IPD) on July 15, 2022.

The two earlier fatal cases of Marburg virus disease (MVD) were reported in the Ashanti region.

In the first case, it was a 26-year-old male who was a farm worker in Adansi North district in the Ashanti region with a travel history to the Western region.

Prior to symptom onset on June 24, he arrived from the Western region to Ashanti region.

He sought care at a hospital on June 26 and died on June 27.

The case was transported and buried in the Sawla-Tuna-Kalba district in the Savannah region, which borders both Burkina Faso and Côte d’Ivoire.

The burial was conducted before the results of laboratory tests for MVD were available.

The second case was a 51-year-old male who was a farm worker in the Bekwai Municipality of the Ashanti region.


He sought care at the same hospital as the first case on June 28 but died the same day.

Both cases presented with fever, general malaise, bleeding from the nose and mouth, and subconjunctival bleeding (bleeding of the blood vessels in the eyes).

An outbreak of MVD has only been reported once previously in West Africa, and this is the first time MVD has been notified in Ghana. An outbreak of MVD may represent a serious public health threat as it is severe and often fatal, according to the World Health Organisation (WHO).

The second case from NMIMR is yet to be corroborated by IPD, Dr Kuma-Aboagye said at the press briefing on Sunday.

He added that a follow up of case, clinical notes suggested the case does not meet VHF definition and that a chronic case of peptic ulcer disease.

Further investigation is being conducted and that all contacts of the “case-patient” have completed mandatory 21-day quarantine and are all well.

Dr Kuma-Aboagye said the implementation of several interventions with focus on three regions; Ashanti, Savannah and Western is underway and that a cumulative list of 118 contacts in three districts in the three regions were identified – Ashanti – 50; Savannah – 48 and Western – 20,

Nineteen of the contacts were HCWs; 99 were close family members or household/community contacts and all contacts have completed the mandatory 21-day follow-up as of the July 21, 2022.

It is from this that one close contact reported symptoms after the maximum incubation period, tested positive together with his close contact (yet to be corroborated by IPD) and died on July 21, 2022.

Dr Kuma-Aboagye said currently, 40 additional contacts have been identified in the Savannah Region and are being followed up, 11 of the 40 contacts are Health Care Workers.

The Director-General of the GHS said other measures being implemented include: alerts sent to all districts, community engagements – Intensive risk communication in the affected region and further investigations on the outbreak ongoing.

Constitution of a Rapid Response Team (GHS and Partners) to support the regional and district response teams for detailed investigations
Clinical records review and sensitisation of clinical staff
Support with contact tracing and follow-up
Provision of more PPEs and other logistics by GHS/MOH and Partners
Development of training tools and education materials
Training of on community based surveillance for volunteers and supervisors
Total of 60 CBSV, 12 CHOs (as supervisors) and 8 other staff (as coordinators) trained
Additional training ongoing
Development of National Response Plan
Next steps

To enhance community engagement
To monitor all contacts for 42 days
To offer psychological support to families
To train CBSVs to do case search and contact tracing
To enhance risk communication activities
Environmental Assessment by Wildlife at affected districts (Adansi North, Bekwai, Prestea Huni Valley, STK)
Collaborating with Wildlife and Partners to conduct a nationwide Risk Assessment
Additional sample of 2nd case for confirmation
COVID-19 situation in Ghana
Ghana has seen a decline in active cases of COVID-19 in the last week