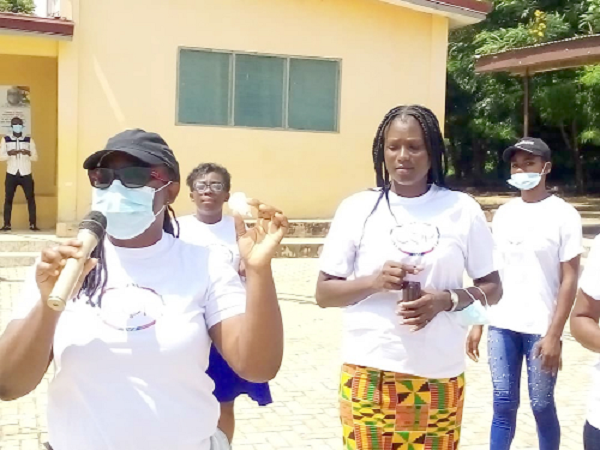 A specially designed menstrual cup to contain menstrual blood for menstruating schoolgirls has been introduced to schoolgirls within the New Juaben North municipality in the Eastern Region.
Some of the beneficiary schools are the Presbyterian JHS, SDA JHS, Methodist JHS, Roman Catholic JHS and Anglican JHS among others.

The menstrual cup can be emptied and washed after each menstruation period and used again over a period of time before discarding it.

The menstrual cup, which will be piloted over a period, will ensure that the schoolgirls menstruate with ease and comfort without anybody noticing it during classes.

The cup will also enable the schoolgirls to attend school regularly during their menstrual periods.

The menstrual cup, which is being used in other African countries, has also been introduced in Ghana by a non-governmental organisation (NGO) called Could You?, based in the United States of America.

The NGO is expected to distribute the menstrual cups to 100 schoolgirls at Jumapo also in the municipality next week where female volunteers already trained by the NGO will go round the schools to teach the schoolgirls how to use them correctly.

According to the Country Director of the NGO, Mr Kofi Kyeremanteng Nyanteng, his outfit would begin the distribution of the menstrual cup to the schoolgirls next week.

He stated that most often, schoolgirls felt shy when their peers, especially boys, noticed they were in their menstrual period and, therefore, decide not to attend classes.

Mr Nyanteng emphasised that the use of the menstrual cup would also curb teenage pregnancies, HIV/AIDS and other sex-related diseases as well as ensure that the schoolgirls would be present in classes even during their menstrual periods.

With regard to the banning of menstruating women in carrying out household duties such as cooking and crossing of rivers to fetch water, which to traditionalists is a taboo, Mr Nyanteng intimated that his organisation would reach out to traditional leaders on how best to address the issue.

The Founder and Chief Executive Officer (CEO) of the Voice of Zongo Communities in Ghana, Dr Abdul Mannan Mustapha Waru, for his part expressed worry that schoolgirls were unable to attend classes due to their monthly menstruation.


He said he was, therefore, hopeful that Could You?, a non-profit organisation, had come to their aid to help address their menstrual period problems.

The Vice-President of the Fulani Community in Ghana, Chief Osman bin Ahmed, said he was optimistic that no schoolgirl would stop going to school because of menstruation.

“Chiefs have a lot of roles to play traditionally, the government alone cannot do it because the development of every community largely depends on education and a situation where most of our young girls cannot go to school because of their menses is unacceptable,” chief Ahmed said.

The Royal House of Fulbe in Ashanti Region, Her Royal Highness Queen Ameenata Koita, who is also the brain behind raising funds to support the Could You? initiative, said young girls should not drop out of school because of their monthly menstruation.