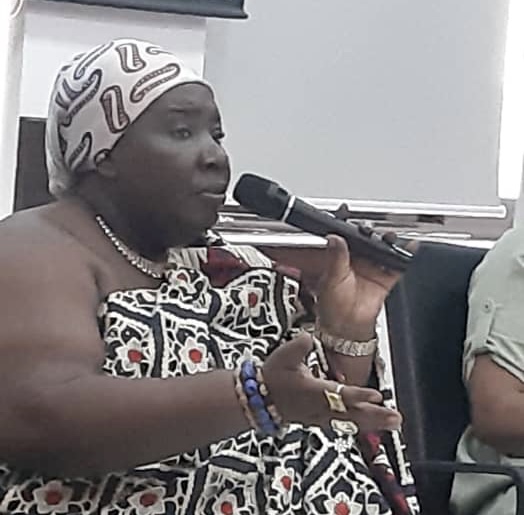 The Paramount queen mother of Mankessim, in the Central Region, Nanahemaa Ama Amissah III, has called for increased effort towards the goal of ending Obstetric Fistula by 2030.
Regrettably, she said, obstetric fistula had not received the desired attention from both government and society at large, forcing the victims to endure the medical condition though they can be treated.

Noting that Obstetric Fistula mainly afflict poor women, Nanahemaa Amissah III stressed that women who end up with the condition live a state of distress because of the stigma associated with the it.

Nanahemaa Amissah III was speaking at an interactive session to mark the 2022 International Day to End Obstetric Fistula held at the United Nations Population Fund (UNFPA) in Accra under the theme, “End Fistula Now: Invest in Quality Healthcare, Empower Communities.”

Women experience Obstetric Fistula due to obstructed labour complications. It is a medical condition in which a hole develops in the birth canal, usually due to prolonged obstructed labour, resulting in incontinence of urine or faeces.


According to the queen mother, one of the major reasons women get obstetric fistula is because they are either unable to afford health care services or make long distance trips to health facilities.

“Beyond the medical condition, the social consequences are severe, and the affected women often struggle with social and marital relationships, their mental health and economic capacity”, she said.

A strong advocate for the campaign to end Obstetric Fistula, Nanahemaa Amissah III works with the Mercy Women Hospital at Mankessim to repair the fistula of patients.

The hospital has a 45-bed Obstetric Fistula Unit that offers surgery to women with the medical condition.

She explained that a large proportion of the society are unaware that Obstetric Fistula can be treated, so the condition is shrouded in cultural beliefs, forcing many women sufferers to go into hiding.

“I, therefore, look for such women in the community and direct them to the Mercy Women Hospital where they go through free surgery to repair their fistula, the queen mother stated.

Since the establishment of the Fistula Unit in 2015, about 600 women have had free fistula repair surgeries with 50 more on the list, awaiting their turn. These include patients from the Central Region as well as referrals from other parts of the country.

Nanahemaa Amissah III indicated that currently, the surgery costs GHc4,050, adding that though it’s done free of charge for the women, funds must be raised to pay the hospital for its services.

Hence, since 2015 she has been canvassing financial support from institutions, churches and corporate bodies to pay for the cost of surgery for the fistula patients.

Through her efforts more than 450 patients have been successfully repaired. In addition, the women are equipped with income-generating skills under her ‘Enyidado’ Foundation to integrate them back into society.

The queen mother expressed her gratitude to the First Lady, Mrs.Rebecca Akuffo-Addo for providing funds to pay for some of the surgeries and the Access Bank for its continuous support towards paying for the surgeries.

she appealed for support from more institutions, organisations and individuals to enable the women who are waiting undergo surgery.

Nanahemaa Amissah III also stressed the urgent need for strategic public education as it is evident that majority of the public are unaware of the condition and are unable to adequately support women who suffer from it.

The queen mother noted that some health workers are not even familiar with obstetric fistula and therefore do not know how to deal with it when it occurs.

She further emphasised the role of traditional authorities, opinion leaders and communities in leading the effort to end obstetric fistula by the year 2030, adding that all these key stakeholders must be educated to understand the condition and how they can support the victims.

An advocate for mental health and maternal health care, Ms Ruth Sawyerr also observed that women who suffer from obstetric fistula go through a lot of mental stress without receiving the needed care.

Pregnancy, she said, already puts women through a lot of mental stress and therefore they should be assisted with the required services.