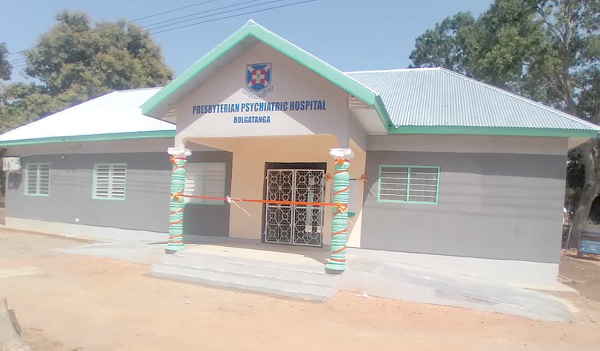 A 10-bed specialist psychiatric hospital has been inaugurated by the Presbyterian Church of Ghana in Bolgatanga in the Upper East Region.
The facility is the first-ever psychiatric hospital for the five northern regions since the Tamale Teaching and Central hospitals only have a unit and department designated for mental health patients.

The well-furnished facility, constructed at a cost of €43,000, was funded by friends of Bawku, a benevolent group based in the Netherlands and the Presbyterian Church of Ghana.


The Friends of Bawku paid for two-thirds of the total cost of the facility which was started in April 2022 and completed in September 2022 while the Presbyterian Church paid the remaining one-third of the cost.

The facility, which was inaugurated to coincide with this year’s World Mental Health Day celebration, has two consulting rooms, male and female wards, nurses’ station, nurses changing room and rest rooms, washrooms and an office for the administrators, among others.

It is envisaged to provide services in adult psychiatry, forensic psychiatry, drug and alcohol detoxification, geriatric psychiatry and psychotherapy services.

The hospital will, in the near future, include ECT and rehabilitation services.

At a ceremony to inaugurate the facility yesterday, the Moderator of the General Assembly of the Presbyterian Church of Ghana, Rt. Rev. Prof. Joseph Obiri Yeboah Mante, said the hospital had been established as a further response by the church to the government’s call on all stakeholders in the health industry to come on board in its efforts in bringing management of mental health cases to all parts of the country.

He noted “our church does not see persons living with some form of mental health condition as less human, we equally see them as deserving of every fair treatment anyone is entitled to in the country.

“We see their condition as any other disease such as malaria or headache which can and should be treated” he said, noting “as a church, we believe in prayer as well as medical care since there could be spiritual and physical causes of mental health conditions”.


He stressed that the church had adopted a policy guideline that made it mandatory for all its prayer camps to affiliate with health facilities so that people with mental health issues would receive both spiritual and medical care at the same time.

The Moderator said the church had accepted that it was the primary responsibility of the state to provide health services to the people of the country, adding “we also acknowledge that the state alone cannot do this huge task.

While commending the other benefactors who supported the construction of the hospital, he noted that the church would monitor the growth and development of the facility to attain an enviable position as the preferred mental health facility.


The in-charge of the hospital, Dr Dennis Daliri, said the new facility would henceforth provide them with the window of opportunity to stop the age-old practice of referring common mental disorders that required admission to psychiatric facilities to the south.

He said, “this facility will fill in the gaps of having to send nursing students to the south for affiliation, adding “this new hospital will ensure the positioning of a specialist psychiatrist in the region to oversee all the 15 Municipal and District Assemblies (MDAs) in the region.

For his part, a Deputy Director in charge of administration at the Upper East Regional Directorate of the Ghana Health Service, Pascal Dongzuing, lamented that there was a shortage of psychiatrists in health facilities nationwide.


He noted that the GHS had put in place the needed measures to ensure the training of more psychiatric nurses to strengthen the system to provide the best of care for mental health patients in the region.

The President of the Upper East Regional House of Chiefs, Pe Ditundini Adiali Ayagitam III, commended the Presbyterian Church for its immense contributions in all sectors towards growth of the region and the country as a whole.