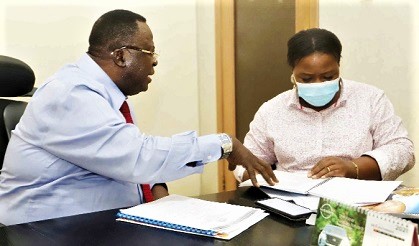 After almost two decades of the discovery of the Goat Serum in the fight against HIV and AIDS, funders of the test in the country are calling on the Noguchi Memorial Institute for Medical Research (NMIMR) to make public the findings of the research.
The funders, the Grace Eureka Bio-Medical Research Product International based in Accra, on August 5, 2022 wrote to the institute to make available for publication the results of the test with the World Health Organisation (WHO) seal of certification.

The letter, signed by the President and Chief Executive Officer (CEO) of Grace Eureka, Dr Edward Siaw Sefa, a copy of which the Daily Graphic has sighted, had the topic: “Preparation and In Vitro Testing of Goat Anti-Serum to Human Immunodeficiency Virus types One and Two”.


It requested the NMIMR to make available certified results and attach the requisite contact details of scientists involved in the study to a member of the Council of State, Richard K. Atikpo.

The letter said the discovery of the serum was Ghana’s opportunity to save the world from the scourge of HIV and AIDS.

A serum is a protein-rich liquid of an animal used to provide immunity to a pathogen or toxin by inoculation or as a diagnostic agent.

However, in a sharp rebuttal, a former Deputy Director of the institute, Prof. Michael Wilson, who was at post at the time of the test, said it was not the place of the institute to publish the findings.

He said the contract between the institute and the researcher of the goat serum, Dr Gary Davis (now deceased), then a Director at Grace Eureka, was for the NMIMR to do a test tube research to ascertain whether the serum was potent in the fight against HIV and AIDS.

In an interview with the Daily Graphic in Accra, Prof. Wilson said in 2005, Dr Davis and his team from Grace Eureka contracted the services of the NMIMR to run the test on the goat serum.

According to him, the test came out positive, meaning that the serum in its test tube form was found to be potent.


He added that the institute then gave copies of the results to Grace Eureka and Dr Davis, who by then had fallen out with each other.

Prof. Wilson said that was all that was required of the institute and, therefore, he was surprised that almost 20 years later, a letter had surfaced claiming that the institute did not publish the results and should, therefore, make them available to the funders again.

Asked what should have been the next steps after the results had been made available to the parties involved, Prof. Wilson said there should have been further tests or experiments on animals to determine whether the serum was safe and not toxic and then move on to do clinical trials, which should be preceded by a safety trial.


However, Dr Sefa said he was alarmed at a recent Daily Graphic report which said 23,495 people had tested positive for HIV in the first half of 2022.

The figure is two per cent of the 948,094 people who undertook HIV testing from January to June 2022.

The figure is said to be from different segments of the population, namely: men, pregnant women, non-pregnant women, homosexuals and female sex workers.


Dr Sefa said the situation of HIV and AIDS in the country was still scary and needed a quick intervention.

According to him, the goat serum had been used on different occasions in some parts of the world and Ghana where it had been proved to be efficacious.

He said the scientist, Dr Davies, had already done the test tube test in the USA, which had also proved that the serum was viable.

He said the goat serum had to be tested in Ghana upon a request by the National Institute of Health (NIH) of the USA to enable Grace Eureka to undertake further work for clinical trials to begin.

Dr Sefa said the clinical trial could not be done because a lot of impediments were put in the way of Grace Eureka internationally and locally, after which Dr Davies died after he returned to the USA.

In 2005 when the NMIMR did the test and it was published by the Daily Graphic, some HIV and AIDS champions rubbished it as not being the answer to the cure.

Prof. Nana Kofi Ayisi, who performed the laboratory experiment on the goat serum, however, insisted that the work was significant and “gives cause for hope”.

Prof. Ayisi, in an interview with the Daily Graphic at that time, explained that “the essence of the laboratory test was to confirm earlier tests that had proved that HIV antibodies could be produced in goats for clinical trails to be undertaken”.