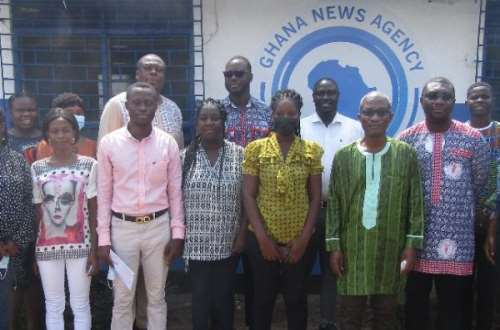 The Ghana Optometric Association (GOA) has warned the public to stop breastfeeding infected eyes as the unscientific method of dropping breastmilk on the eyes as a form of medication.

“This could rather worsen the infection leading to complications. There is an orthodox belief that if lactating mothers drop some breastmilk on the eyes of their baby’s eye when it turns red or there is evidence of infections it would be healed”.


Dr Alfred Gardemor, Public Relations Officer of the Association gave the advice when answering a question on the effect of using breastmilk as eye drops during the launch of Ghana News Agency-Tema Regional Office and the Ghana Optometric Association flagship initiative “GNA-GOA: My Eye! My Vision!

The initiative is a collaborative public education advocacy campaign to promote the need for people to access eye care and also to draw attention to vision health.

The GNA-GOA: My Eyes! My Vision! The initiative also seeks to challenge the public and policymakers to focus on vision as a health issue, which forms a critical component of mankind’s wellbeing but is often neglected.

Dr Gardemor who is also a medical officer at the Nsawam Government Hospital said breastmilk was for the exclusive feeding of babies as it had some components that helped fight infections, but it was unhealthy to assume that it could also cure eye infections.

He added that the eye especially that of babies was delicate and therefore must not be experimented with use of breastmilk and seawater as medications.

He also cautioned the public against purchasing concoctions and other products purported to be medications to heal piles popularly known in Ghana as ‘koko’ on the eyes as he stated that piles do not grow on the eyes.

Deputy Superintendent of Police (DSP) Dr Remi Ninkpe, National President of GOA, on his part called on government, corporate organizations, and individuals to join in the GNA-GOA: My Eyes! My Vision! Campaign to promote preventable measures to blindness as about 75 per cent of people with eye diseases risked going blind for not seeking early intervention.

DSP Ninkpe who is also a medical officer at the Police Hospital in Accra said “Let empower every single Ghanaian with accurate information so that we all can make excellent decisions when it comes to health care.

“If we are all well-informed then we can make better choices and be more proactive with respect to our eye health specifically and general wellbeing.”

He added that a lot behooved on Ghanaians to take their visual health seriously as some conditions that might lead to irreversible visual loss or blindness were easily preventable when detected early.

Mr Albert Kofi Owusu, General Manager of the Ghana News Agency commended the GOA for partnering the Agency to project eye-related issues, as he noted that the wide reach of the Agency would help set the agenda for discussions on the topics to be treated under the campaign in subsequent weeks.

Mr Francis Ameyibor GNA Tema Regional Manager explained that as part of “GNA-GOA: My Eyes! My Vision! “We are combining the forces of our professional calling as Optometric Physicians and Communication Experts to reach out to the public with a well-coordinated message”.

He said the collaboration would serve as a major platform to educate the public on vision and also serves as a critical stage for the association to reach out to the world.