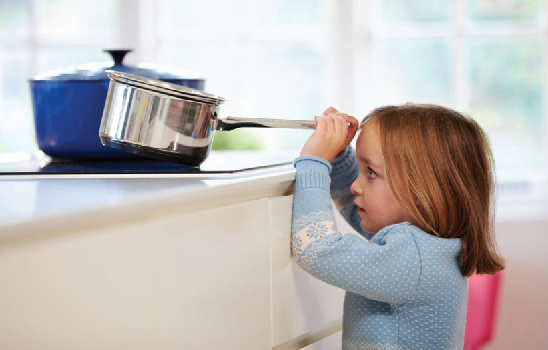 A child grabs the handle of a saupan on a stove
Two-year-old Cynthia strolled leisurely towards the bucket in the bathroom, carrying her little toy.
She dropped the toy into the bucket, which was full of water and watched it sink to the bottom.
Baby Cynthia got fascinated and decided to it again. Her mother was supposed to keep an eye on her but she was glued to the television set in the hall.


To reach her toy, baby Cynthia bent over the bucket. Instantly, her legs lifted, plunging her headlong into the water. By the time she reached the toy, she was gasping for breath, drowning.
This is just one of the dangers children are exposed to at home against which they need to be sheltered.
The Convention on the Rights of Children include their safety and child safety doesn’t happen by accident—it must be intentionally nurtured.
It is not for nothing that the medicine box has “Keep medicine out of reach of children” written boldly on it. But a negligent father, after taking his medication, just dropped the box on the sofa and entered his study.
Children think that picking up things on the floor and putting them in their mouths is like spoon feeding them.
By the time the father returned from his study, his little boy had managed to open the medicine box and swallowed a few of the pills.
The boy survived at the hospital but the near-fatal incident badly shook the parents.
The tragedy occurred in a split moment when the child was left on his own and when the father overlooked the simple instruction to keep medicine out of reach of children.


Nelson Mandela is quoted as saying that “The true character of a society is revealed in how it treats its children.” You can say the same about the true character of a family.
Electricians advise that all electrical wall outlets at home should have plastic covers when not in use. The reason is obvious, isn’t it?
Electrocution occurs when a child pushes a metal object into the socket. To him, he is only playing but that play can turn deadly.
Another scenario
Here is another scenario. It was time for the KG child to have his early morning bath. Mother poured hot water from the kettle into an empty bucket.
Then she went out to fetch cold water from a tank to mix it up, leaving the child in the bathroom.
By the time she returned with the cold water, the child was screaming his lungs out with blistering hands. Quickly, the itinerary changed from school to a nearby clinic.
Leaving the child near the hot water was certainly absent-mindedness on the part of the mother.
Child safety at home is a huge concern, demanding serious attention by parents. The next scene is frightening.
Papa left the car engine running and re-entered the house for his gym kit. When he returned, he jumped onto the driver’s seat and began to back out. Where on earth did junior, his three-year old son, appear from?
The boy had followed daddy out without daddy knowing it and was standing right behind the car.
Just a split second and Papa would have reversed the car right over his son but for the timely intervention of his wife.
Wifey had seen the boy follow his dad out and had run after him in time to see the husband’s car backing out of the garage.
Wifey yelled with all her might, “Stop, daddy! Stop!” Papa rammed on the brakes only inches away from the boy.
Junior burst out laughing, fascinated that his mother could stop a moving vehicle with a shout!
Trembling like a leave in the wind, Papa aborted his gym trip while his wife bundled their son to her chest.
Although husband and wife had had their morning devotion, they spent the next hour in prayer.
What they just witnessed was a disaster that never was and how grateful they were to God for saving their son!
Other dangers
We lack the space to reveal other dangers children face at home—in the kitchen when left alone to toy with the gas stove; polythene bag suffocation; danger from opening and closing doors. I once saw a child walk out of an open gate to the street.
Who was keeping an eye on that child?
Even a misplaced parent’s anger can compromise a child’s safety at home. The day I saw a father hit his own son with firewood, I felt as if I was the one who had been hit.
Children are God’s special creation. Their very vulnerability demands that we keep an eagle eye on them to ensure their safety.
The writer is a publisher, author, writer-trainer and CEO of Step Publishers.
E-mail: lawrence.darmani@gmail.com