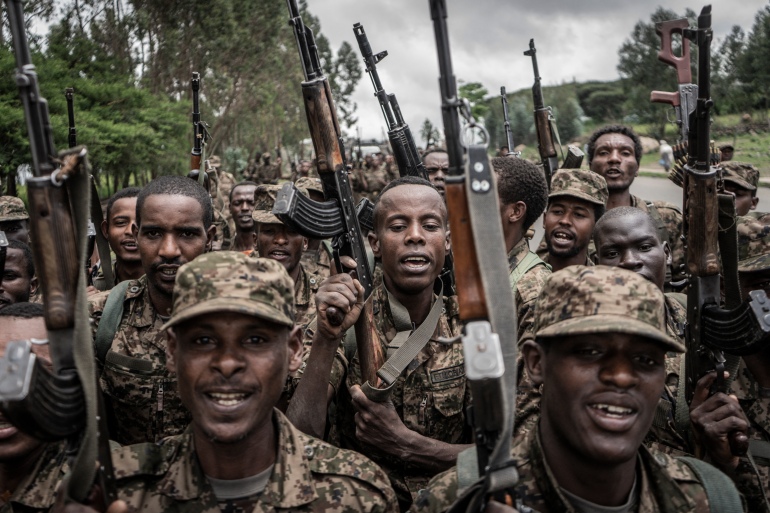 Troops from the two countries have attacked fighters in the northern Adayabo area, a Tigrayan rebel spokesman says.

Getachew Reda, the Tigray People’s Liberation Front (TPLF) spokesperson, said on Thursday that both nations’ forces had attacked rebels in Adayabo in the north of the region.


A humanitarian worker in Shire said drivers coming from the area reported cross-border shelling on Wednesday.

The conflict resumed last week after a five-month lull, with clashes on the ground and air raids over Tigray dashing hopes of peacefully resolving the nearly two-year war.

Fighting had been concentrated around the southeastern border of Tigray, with the rebels pushing into the neighbouring Amhara and Afar regions, sending residents fleeing.

But Prime Minister Abiy Ahmed’s government on Wednesday accused the TPLF of launching “an invasion in the direction of Wag, Wolqait and our border areas with Sudan [Amhara region]”, west of the site of the most recent clashes.


“Our heroic national defence forces are defending this invasion with full preparedness and resolve,” the government communications service said in a statement.


Getachew in turn alleged the government and its neighbour Eritrea – which backed federal forces during the war’s early phase – were responsible for opening a new front.

“The Abiy regime, along with the Asmara regime, did launch [an] offensive in these fronts. We are defending our positions,” he said.

Sign up for Al Jazeera
Weekly Newsletter
The latest news from around the world.
Timely. Accurate. Fair.
E-mail address
Sign up
By signing up, you agree to our Privacy Policy
The TPLF has repeatedly said the area is a “non-negotiable” part of Tigray.

Access to northern Ethiopia is severely restricted and it is not possible to independently verify the situation on the ground or the claims by the warring sides.

Reports of a new offensive came as Tigray’s capital, Mekelle, was hit by the second air raid since Friday.

“Casualties are arriving to Ayder Hospital,” he said on Twitter, without giving details.

The TPLF later said the attack caused civilian injuries and property damage. Government officials did not comment on the bombing.