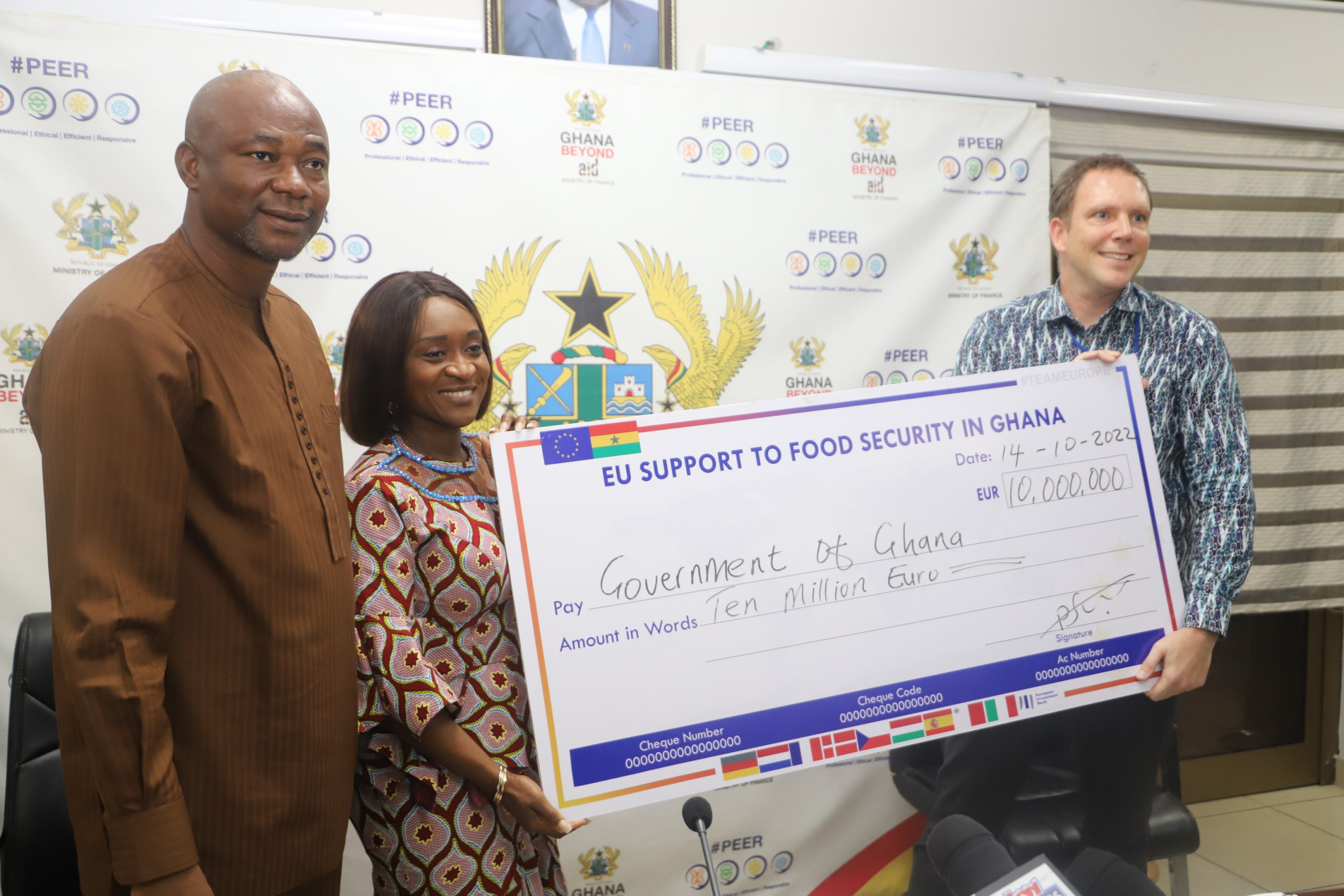 The European Union (EU) on Friday signed an agreement to provide €10 million support Ghana’s food security and agribusiness value chain sectors.
The support is part of the € 600 million the EU has allocated to finance humanitarian food aid and food production in Africa.

The funds will specifically support families in the country to grow crops so that they can generate income and make food readily available and affordable on the local market.

It is also expected to help promote climate smart (adapting agricultural methods to climate change) and ecological initiatives in a number of agribusiness value chains including soybean, beekeeping and vegetable production in the country particularly in Northern Ghana.

The funds comes in the wake of global food shortages, hunger and economic shocks being experienced by people across the World due to the negative impacts of the COVID-19 pandemic and the ongoing Russia-Ukraine war.

The EU Charge d’ Affaires, Pieter Smidt Van Gelder accompanied by a six-member EU delegation presented a dummy cheque of €10 million to a Deputy Minister of Finance, Abena Osei-Asare who received it on behalf of government at a short ceremony at the Ministry of Finance in Accra.


The EU delegation were Ambassadors Daniela D’Orlandi of Italy, Jean Claude Galea Mallia of Malta and Jeroen Verheul of the Netherlands.

The rest were Jose Javier Blanco-Navarette of Spain, Tamas Endre Feher of Hungary and Franziska Jebens, Head of Cooperation of Germany.

Prior to the presentation, Mr Gelder said the emergency measure was adopted “in record time directly following the outbreak of the war and its negative consequences on global food security”.

He explained that the EU mobilised its member states to “join forces and fight together against the global food security crisis”.


He indicated that the new funds comes on top of “our 203 million Euro joint programming support already dedicated to Ghana for 2021-2024″.

Mr Gelder stated that the intervention will complement government’s efforts to reduce poverty, hunger and malnutrition especially in vulnerable areas most affected by high prices of food, fertiliser and fuel.

He said the funds would also strengthen the ongoing €132 million EU-Ghana Agricultural Programme (EU-GAP) which aims at increasing agricultural productivity, protection of natural resources, access to markets, infrastructure and capital for smallholder farmers.


Mrs Osei-Asare in her response, expressed gratitude to the EU for the support saying “we are grateful to the EU for its continuous support to Ghana’s development agenda since the beginning of our relationship in 1975”.

She noted that the EU had been a strategic partner of Ghana over the years with support to the country in sectors such as infrastructure development, good governance, agriculture and public financial management among others.

She recalled vividly the “flexibility” exhibited by the EU in the provision of €86.5 million to the country as Emergency Budget Support during the peak of the COVID-19 pandemic.