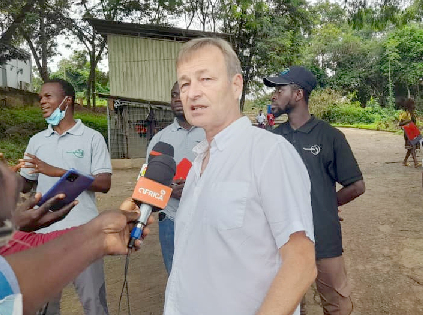 The Management of the Tropo Farms Limited, producers of tilapia at Mpakadan in the Asuogyaman District in the Eastern Region, has called for urgent dialogue between the company and stakeholders in the railway and fisheries sectors.
They said the dialogue was needed to resolve issues relating to the construction of the New Akrade to Mpakadan section of the Tema – Mpakadan railway line.

The call follows an incident last Friday during which armed policemen numbering about 10, accompanied by two excavators and a bulldozer, invaded part of the premises to clear a portion of land, which destroyed the water system of the company and disrupted electricity supply.

The Chief Operations Officer of the company, Mr. Andries Zwaga, made the appeal when he took newsmen to see the extent of damage to the company’s properties, last Tuesday.

He said the most worrying aspect of the incident was that there was no communication and what they realised was that armed men had invaded the company’s premises.

He said the Ministry of Railways, Ministry of Fisheries and the Ghana Railway Development Authority must come together to find an amicable solution to any matters arising, since the company was ready to cooperate.

“We are not against the construction of the railway line. It is a laudable project and we will not do anything to sabotage it. However, the compensation process must be expedited, since we are ready to relocate our operations to other areas on the Volta Lake,” he told newsmen.

According to him, the issue of compensation had become critical, since the relocation would come at a greater cost to the company with most of the workers losing their jobs.

Mr. Zwaga said the company, which employed 800 workers, was made to understand that the line would pass through the farm to the yet-to-be-constructed harbour attached to the project.

He said a lot of noise, vibration and dumping of boulders by the construction firm, AFCON, an Indian company, could lead to stress, leading to diseases with their attendant consequences.

He added that the company had boosted the economy of surrounding communities such as Atimpoku, Juapong, Akrade, Frankadua, Fentey and Tusker, as a result of its operations.


The company is the largest producer of tilapia in Ghana and the second largest in sub Saharan Africa. It has a total land area of 2,000 acres and over 300 cages on a portion of the Volta Lake and produces 200 tonnes of tilapia weekly.