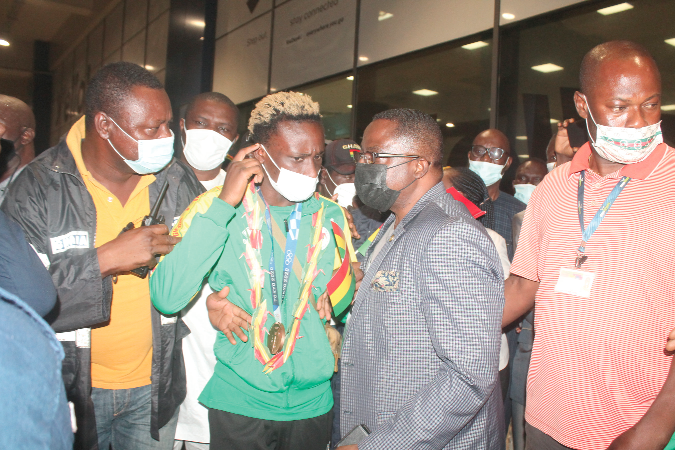 Ghana’s sole medallist at the just-ended Olympic Games, Samuel Takyi, arrived to a hero’s welcome at the Kotoka International Airport yesterday and pledged to raise the bar higher by rewriting the books at the next Olympic Games in Paris, by winning the first gold medal for the country.

Bronze medallist in the featherweight division in Tokyo, the 21-year-old Jamestown native pledged to continue to work hard to bring more international glory for Ghana.

“I know the expectation of Ghanaians and I won’t disappoint them, I will go for the gold,” he stated on his arrival, together with the second batch of Ghana’s contingent to the global games (the first batch of athletes and officials arrived in Accra last Tuesday).

Flanked by the Minister of Youth and Sports, Mr Mustapha Ussif, and the President of the Ghana Olympic Committee (GOC), Mr Nunoo Mensah, Takyi was mobbed by a crowd that included his proud mother, Eunice Smith, who gave his son a warm embrace as the excitement at the waiting area of the arrival hall reached fever pitch.

More than two hours before the team’s arrival, busloads of boxing fans from Jamestown and organised supporters groups had turned the airport into a festive ground as they sang and danced while waiting for their hero.

It was a scene reminiscent of the arrival of many national heroes from major international competitions in years past.

And for a nation which had been deprived of Olympic glory long before the young boxer was born, the bronze medal was worth the wild celebrations, and yet another strong grounds for the country to pay more attention to boxing which has contributed to four of the five medals won by Ghana since Ghanaian athletes first participated in the global games in 1952 in Helsinki Finland.

Mr Ussif was unequivocal about the importance of more attention and investment by the state and corporate bodies in boxing through the development of more gyms to produce more heroes.

“Takyi winning a medal means we must take sports more seriously and we call on corporate Ghana to invest in sports,” he stated at the welcome ceremony.
By this achievement, Takyi joins the exclusive club of boxing medallists at the Olympics, namely Clement Quartey (silver, 1960 in Rome), Eddie Blay (bronze,1964 in Tokyo) and Amartey (bronze in 1972).

Takyi provided good reasons for Ghanaians to celebrate the nation’s modest achievements in Tokyo as Ghana had waited nearly three decades for another Olympic medal since Coach Sam Arday guided the Black Meteors to win bronze — Africa’s first medal in football — at the 1992 Games in Barcelona.

His exploits in Tokyo were even more remarkable because boxing had waited 49 long years for Ghana to get to mount the podium again since light middleweight Prince Amartey won bronze at the 1972 games in Munich.

The significance of the youngster’s exploits could also be measured as he again enjoyed his moment in the spotlight during the closing ceremony. He became the first ever Ghanaian athlete to be selected to represent Africa on the podium as the only African boxer to win a medal in Tokyo, sharing the stage with representatives of other continents when IOC President, Mr Thomas
Bach, gave his speech to officially draw the curtain on the global games, pushed back one year due to the COVID-19 pandemic.