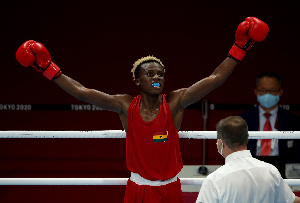 Takyi defeated Colombian fighter David Ceiber in the quarter-finals meaning he’s won a bronze medal at least, next he’ll fight in the semi-final for a shot at gold.

Samuel Takyi  has won his Olympic quarter-final to guarantee himself a medal at Tokyo 2020, a first Olympic medal for a Ghanaian athlete in 29 years.

Similar celebrations were happening across Ghana on a historic day in the ring, and they may get louder as Takyi moves on to the semi final where he’ll face the USA’s Ragan Duke .

The 20-year-old has caused a sensation by making the podium after his selection for the boxing team in Tokyo initially caused eyebrows to raise.

Now it’s hands in the air as “The Golden Ring Warrior” has brought it home, the first Olympic medal since the football team won bronze at Barcelona 1992.

And the first boxing medal since middleweight Prince Amartey who took the bronze in Munch 1972.