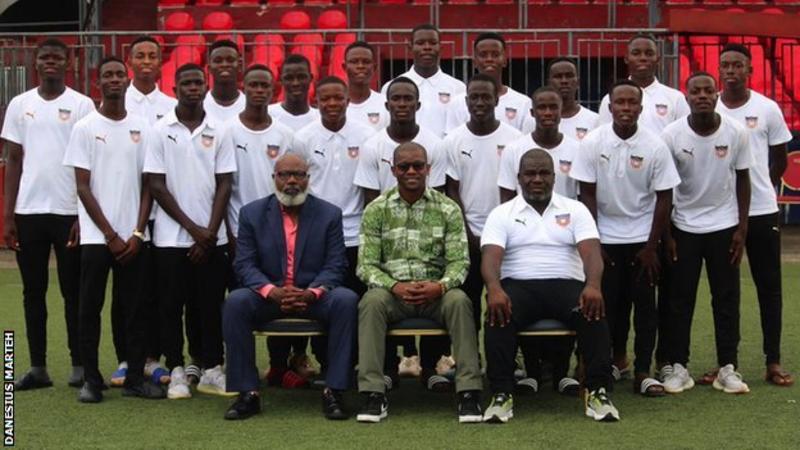 Liberia’s hopes of reaching next year’s Under-17 World Cup were ended by their disqualification from Nations Cup qualifiers
Liberia’s sports minister Zeogar Wilson has blamed the country’s football association (LFA) for the disqualification of their men’s side from qualifiers for the Under-17 Africa Cup of Nations.

The West Africans became the third country to be thrown out of a regional tournament for age cheating this week, after Djibouti and Sudan were expelled from East and Central African qualifiers.

Liberia were disqualified on Monday after two players failed a magnetic resonance imaging (MRI) scan, which was being used by the West African Football Union (Wafu) in line with Confederation of African Football (Caf) regulations.

“This is totally unacceptable to us. It has brought embarrassment to the country. Those responsible must be held accountable,” said Wilson.

The minister has launched an inquiry into an issue which he says he has briefed President Weah upon.

MRI machines have been used to scan the wrists of players to accurately ascertain their true age, and were first used by world governing body Fifa at the U17 World Cup in Nigeria in 2009.

Liberia’s expulsion meant that Sierra Leone and hosts Mauritania automatically reached the semi-final stage of the six-team Wafu Zone A tournament in Nouakchott.

The U17 Nations Cup finals, which will be held in Algeria next April, also serve as African qualifiers for next year’s U17 World Cup in Peru, with all the semi-finalists going through.

In response, LFA president Mustapha Raji said it had relied on players’ parents to confirm their children’s ages after an MRI test in Monrovia did not meet Caf’s eligibility requirements.

“The MRI scan at Jahmale [hospital in Paynesville] can only read up to 0.33 Tesla. The standard requirement of Caf is 1.5 Tesla,” said Raji.

“So the due diligence conducted by the LFA was based on the confirmation from the parents of each and every player, who formed part of the delegation to Mauritania.

“We had explicit trust and confidence in the parents because we aren’t the ones that gave birth to them but we believed in the parents based on the information provided after a series of meetings.

“Unfortunately, science and technology proved that two of the players weren’t eligible to participate in the competition, thus resulting into the disqualification of Liberia.”

Footage seen by the BBC showed inconsolable players and members of the Liberia delegation when the news about their disqualification was announced in Mauritania.

The squad are expected back in Monrovia on Thursday.

LFA ‘did not take responsibility’
Liberia’s Under-17 team
Liberia were set to return to U17 Nations Cup qualifiers after missing the past two editions
However, Wilson described Raji’s response as an inexcusable error that has brought an unacceptable national embarrassment to a country which has a former world-class player, George Weah, as President.

He said the LFA was well aware of the regulations before it entered the U17 Nations Cup qualifiers.

“I refused to accept what the LFA boss called due diligence by relying on information from the parents and consent forms. Some people want their children to go out and get opportunities.

“Why do you think Caf and Fifa introduced MRI if they were just relying on players’ certificates, passports or playing cards from its members? So that isn’t an excuse to rely on the parents.”

Downplaying Raji’s revelation about Jahmale, Wilson said a pre-MRI scan could have been done in Ghana, Guinea or Senegal.

He has announced an investigation into the disqualification led by Philipbert Browne, president of the Liberia National Olympic Committee, along with two members of the Sports Writers Association of Liberia.

Wilson has given the committee 60 days to report its findings and said they will be made public.

It is the first public spat in five years between Wilson and Raji, who have previously enjoyed a cordial working relationship.

“It is a right decision taken by the government,” Weah said.

“The LFA should have taken responsibility for not conducting a pre-MRI scan that led to this embarrassment rather than blaming the parents.”

It is not clear if Liberia will be sanctioned by Caf, with administrative errors in registering players punishable by a one-tournament ban and fraud or forgery carrying a two-tournament suspension.

Liberia were returning to the Wafu Zone A competition after being barred from two editions of the U17 Nations Cup for withdrawing from the qualifiers in Senegal in 2017.

On that occasion, then LFA president Musa Hassan Bility had refused to fund a pre-MRI scan because he did not trust the ages of the players.