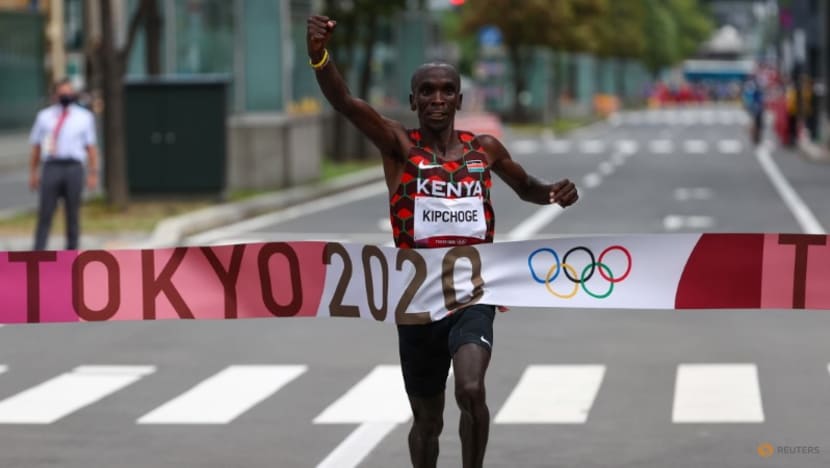 About 30 kilometres into the men’s marathon in Sapporo on Sunday, Kenya’s Eliud Kipchoge pulled away from the pack and began running his own race, chasing immortality.

Kipchoge looked like a man determined to run towards his legacy of greatness. He took a peek behind him at one point and there was no one there. He was all alone – the greatest marathon runner in history and one of the greatest Olympians.

“I wanted to create a space to show the world that this is a beautiful race,” Kipchoge said after winning gold.

He began to smile as marathon-mad Japanese fans, who defied Olympic organisers’ request to stay away due to COVID-19, lined up the streets of Sapporo and cheered him on to the finish line.

Kipchoge was about to become only the third person ever to retain their Olympic marathon title, and cement his legacy. Smiling was his way of enjoying the race, he said later.

“That smile is the happiness,” he said.

He waved at the fans as he came through the tape, slapped his chest and pumped his fist into the air.


“I have fulfilled the legacy by winning the marathon for the second time, back-to-back. I hope now to help inspire the next generation,” he said.

Doubts crept in about his ability to retain the Olympic title he won five years ago in Rio de Janeiro, after he suffered a rare defeat in October’s London marathon.

The 36-year old had previously won 10 straight races and his eighth place finish sparked rumblings that he may have started to fade.

He allayed those concerns after a win in the Netherlands in April. And after his victory on Sunday, in what could be his last Olympic Games, any questions about his abilities were put to rest.

He clocked 2:08:38 to win the race, and now holds two of the top five fastest times ever posted in Olympic marathons.

Kipchoge said last month that winning this gold medal would be his greatest achievement – a big statement for an athlete who already has an Olympic gold, holds the world record and is the only man to have ever run the marathon in under two hours.

“Today I lived my Olympic dream,” he said. “I always say that sport is like life, whereby you can win and lose. But today was a day where I won and get to say I successfully defended my Olympic title.”

The marathon and the Tokyo Olympic Games at large were about more than just sports for Kipchoge, they were about the endurance of the human spirit.

They represented hope after a year of human suffering and deaths due to the global pandemic, he said, the mask-wearing crowds along the marathon route a stark reminder that COVID-19 was still raging on.

His win on Sunday held more significance than just the gold medal he wore around his neck after the race.

“It means a lot for me, especially at this time,” he told reporters later, saying the past year had been “really hard” particularly with the postponement of the Tokyo 2020 Olympics.

The fact that the Games went ahead was important to show that life will return to normal one day, he said.

“It is a sign that shows the world we are heading in the right direction – we are on the right transition to a normal life,” he said.

Asked in July whether the race in Sapporo would be his last, Kipchoge said that he still has the competitive spirit to go on.

“The end of my career will come automatically that’s for sure, that’s in front of my mind, but for now I still want to compete more,” he said. “I still want to go around the world and run, inspire people.”

On Sunday, he was still non-committal, saying he would take it one step at a time.

“I’m going back now, (will) talk with my coach, see what are the opportunities in the world,” he said. “Now I want to enjoy winning here in Tokyo.”